Hindustan (India) had remained a center for Islamic civilization. The first person embracing Islam was Kirnig Noor, the king of a small state, during the reign of Pious Caliph Umer. Before the advent of Islam in the Sub-continent of South Asia, the prevailing civilization was the Gandhara Art, and Indus Valley Civilization. The architecture of these civilizations was very advance. Even 5000 years ago, the people of Indus Valley Civilization were aware of indoor washrooms, bathrooms, underground basements, and drainage systems. When Islam advance to the subcontinent of South Asia, a new art with a blend of Islamic and the local arts, developed. The new art was called Indo-Islamic Art. The Indo-Islamic Art boosted up the existing architectural method in Hindustan. Many new architectural structures like Minarets, Domes, arch bridges, terraces, Veranda, and Qila were introduced. These structures were the invention of Indo-Islamic Art. During the history of Hindustan, the period of the Mughal Empire was a glorious period with regard to architecture and construction. Many historic buildings, like Taj Mahal, Red Fort, Imperial Mosque, Mosque Wazir Khan, Tomb of Akbar, Jama Mosque of Dehli, etc are still existing examples of the development of architecture in that period.

Taj Mahal is considered to be the seventh wonder of the world. It is located in Agra, state of Utter Pradesh, on the bank of Yamuna River. It is a historic symbol of the Mughal era. It was constructed some 350 years ago during the regime of Shah Jahan. Shahjahan constructed this palace to tribute his beloved wife, Mumtaz Mahal. Taj Mahel was constructed with the help of white transparent marble, which allows outer light through the walls of the palace to illuminate the interior of the palace. Read more about the historic architectural landmark of the Mughal Empire; Taj Mahal 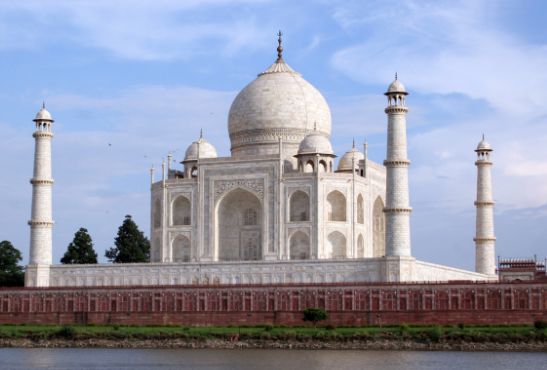 Agra Fort is a historical fort (walled-building) constructed by the most popular Mughal Emperor, Jalal ud Din Muhammad Akber in 1573. Agra Fort, like Taj Mahal, is also located in Agra city of Utter Pradesh State of India. The construction work of Agra Fort was started in 1565, and completed in 1573. The area occupied by the Fort is 38 hectares or 94 acres. Agra Fort is also called Lal Qila or Red Fort, because of the used red stone in the construction of the fort. It had remained as the official resident of emperors of India till 1643. 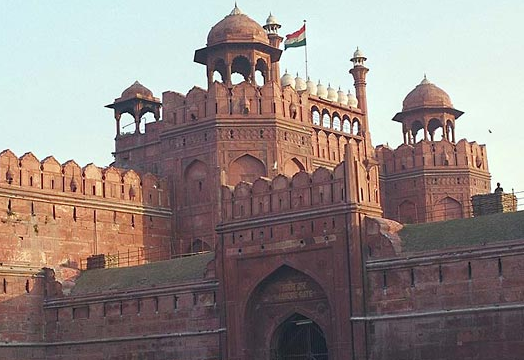 The full name of Akbar was Jalal ud Din Muhammd Akbar. He was the most famous and popular ruler of India among all communities of Hindustan (India). Akbar took over the reign of the empire from 1556 to 1605 (till his death). After his death, his son Jahangir started the construction of the tomb of his father (Akbar the great) in 1605, which was completed in 1613. The tomb is located in a suburb of Agra, namely Sikandra. The southern gate of the tomb is its largest entrance, which was constructed with white marble namely Marble. The minarets of the Chhatri resemble those of the Taj Mahal. The tomb is encircled with a walled enclosure. The enclosure encompasses an area of 119 acres. The building of the tomb consists of pyramids of four tiers, mounted by a pavilion of made of marble covering the upper tomb (false tomb), the true tomb is inside the basement (like other mausoleums). A deep red sandstone, having features of white marble, is used in the construction of the mausoleum. Black slate, stone panels added the decoration of the tomb. Panel designs are geometric, floral and calligraphic, and prefigure the more complex and subtle designs later incorporated in Itmad-ud-Daulah's Tomb. 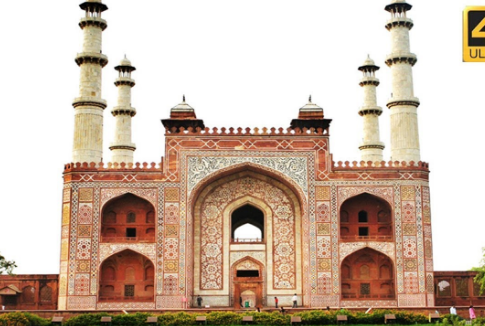 The Badshahi Mosque‎, or "Imperial Mosque" is a Mughal era mosque located in Lahore, capital of the Pakistani province of Punjab. The mosque is located west of Lahore Fort along the outskirts of the Walled City of Lahore, and is widely considered to be one of Lahore's most iconic landmarks. The mosque is located along the outskirt of the walled-city of Lahore. It is recognized as a historic landmark of architecture, in the history of Indo-Pak.

The Imperial Mosque was built by the Mughal Emperor Aurangzeb in 1671. Aurangzeb Alamgir sayed was a religious ruler of Hindustan (India). He stayed as the king till 1707
AD. The construction of this mosque is a glorious example of Mughal architecture, with an exterior that is decorated with carved red sandstone with marble inlay. It remains the largest mosque of the Mughal-era, and is the second-largest, after Shah Faisal Mosque of Islam Abad, mosque of Pakistan. After the death of Aurangzeb Alamgir, the Mughal Empire started declining. The Mughal dynasty came to end with the failure of the war of independence in 1857. After the fall of the Mughal Empire, the mosque was used as a garrison by the Sikh Empire and the British Empire and is now one of Pakistan's most iconic sights. 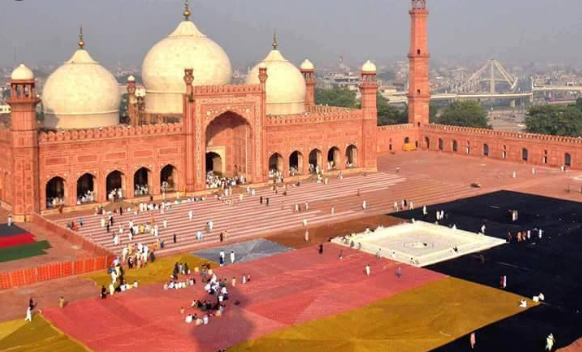 Jama Masjid Dehli, originally known as Masjid Jahan Numa (the world reflecting), is also known as the Mosque of Celestial Spheres, is one of the largest mosques of India and an architectural masterpiece of the Mughal Dynasty. The mosque was constructed by the pious Mughal emperor Shahjahan during the years of 1650-1660. The construction of the mosque completed at a cost of 1000,000 rupees. The mosque was inaugurated by Syed imam Abdul-Ghafur Shah of Bukhara. The construction of the mosque was completed along-with its three minarets of 40-meters in height. The minarets were constructed with strips of red-color sandstone and white-marble. The courtyard of the mosque can accommodate more than 25000 men for prayers. The terrace of the mosque has three domes surrounded by two high minarets. The floor is marked with black marble strips to arrange the lanes for worshippers during prayer. The mosque was constructed by Shahjahan, the son of Jahangir and the grandson of Akbar. 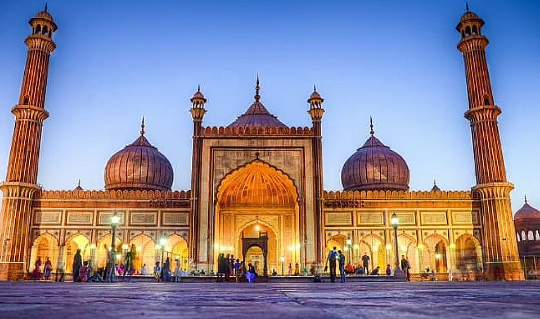 Along with the main building, the structure consists of numerous outbuildings and gardens. The tomb, built between 1622 and 1628, represents a transition between the first phase of monumental Mughal architecture – primarily built from red sandstone with marble decorations, as in Humayun's Tomb in Delhi and Akbar's tomb in Sikandra – to its second phase, based on white marble and pietra dura inlay, most elegantly realized in the Taj Mahal.

The mausoleum was commissioned by Nur Jahan, the wife of Jahangir, for her father Mirz? Ghiy?s Beg, originally a Persian Amir in exile, who had been given the title of I'tim?d-ud-Daulah (pillar of the state). Mirz? Ghiy?s Beg was also the grandfather of Mumt?z Mah?l (originally named Arjumand Bano, daughter of Asaf Khan), the wife of the emperor Shah Jahan, responsible for the construction of the Taj Mahal. Nur Jahan was also responsible for the construction of the Tomb of Jahangir in Lahore. It is noticeable for the first use of pietra dura (floral design made up of semiprecious stone) technique. 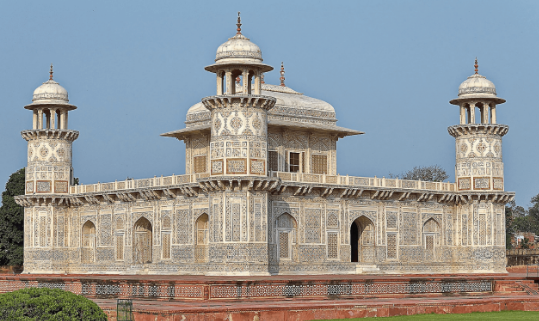 The Tomb of Jahangir is a 17th-century mausoleum built for the Mughal Emperor Jahangir. The mausoleum dates from 1637, and is located in Shahdara Bagh in Lahore, Punjab, Pakistan, along the banks of the Ravi River. The site is famous for its interiors that are extensively embellished with frescoes and marble, and its exterior that is richly decorated with pietra dura. The tomb, along with the adjacent Akbari Sarai and the Tomb of Asif Khan, are part of an ensemble currently on the tentative list for UNESCO World Heritage status 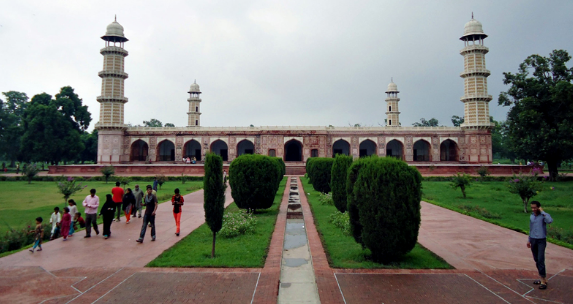 The Bibi Ka Maqbara (English: "Tomb of the Lady") is a tomb located in Aurangabad, Maharashtra, India. It was commissioned in 1660 by the Mughal emperor Aurangzeb in the memory of his first and chief wife Dilras Banu Begum (posthumously known as Rabia-ud-Daurani) and is considered to be a symbol of Aurangzeb's 'conjugal fidelity'. It bears a striking resemblance to the Taj Mahal, the mausoleum of Aurangzeb's mother, Mumtaz Mahal. Aurangzeb was not much interested in architecture though he had commissioned the small, but elegant, Pearl Mosque at Delhi. Bibi Ka Maqbara is the largest structure that Aurangzeb has to his credit.

The comparison to the Taj Mahal has often obscured its very own considerable charm. Due to the strong resemblance, it is also called the Dakkhani Taj (Taj of the Deccan). Bibi Ka Maqbara is the "principal monument" of Aurangabad and its historic city. An inscription found on the main entrance door mentions that this mausoleum was designed and erected by Ata-ullah, an architect, and Hanspat Rai, an engineer respectively. Ata-ullah was the son of Ustad Ahmad Lahauri, the principal designer of the Taj Mahal. Aurangzeb's son, Azam Shah, was in later years put in charge of overseeing the repair-work of the mausoleum by Aurangzeb. 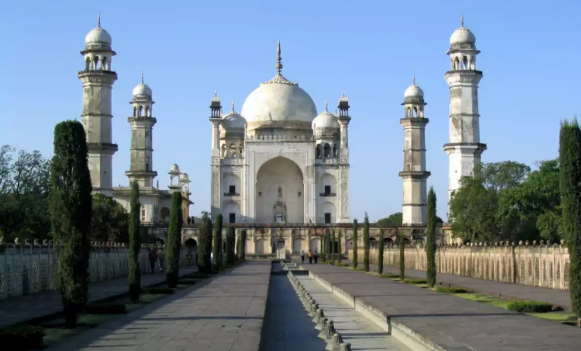 Panch Mahal is a palace in Fatehpur Sikri, Uttar Pradesh, India. The Panch Mahal meaning 'Five level Palace' was commissioned by Akbar This structure stands close to the Zenana quarters which supports the supposition that it was used for entertainment and relaxation.

The Tomb of Salim Chishti is famed as one of the finest examples of Mughal architecture in India, built during the years 1580 and 1581, along with the imperial complex at Fatehpur Sikri near Zenana Rauza and facing south towards Buland Darwaza, within the quadrangle of the Jama Masjid which measures 350 ft. by 440 ft.