The Taj Mahal; structure and foundation; domes and entraces

Articles > The Taj Mahal; structure and foundation; domes and entraces

Taj Mahal, the seventh wonder of the world, symbolizes India. It is located on the southern bank of the river Yamuna, Agra, in the state of Uttar Pradesh. The meaning of the Taj Mahal is “ Crown Palace” and it is truly the most well-preserved and architecturally beautiful tomb. The Taj Mahal is the biggest and most rewarding attraction in India to tourists from anywhere in the World. A Visit to India is incomplete without an expedition to this shrine of mystique and love. Taj Mahal was built more than 350 years ago, but it still has not lost its distinct quality, which attracts millions of visitors towards it. It is because of the everlasting charm that the Taj can boast of being one of the most popular world heritage monuments on the earth. English poet, Sir Edwin Arnold described the Taj Mahal as” Not a piece of architecture, as other buildings are, but a proud passion of an emperor’s love wrought in living stones.”

The Taj Mahal was built over a period of 22 years from 1632, as a tribute to beautiful wife Mumtaz Mahal for enduring love by the Mughal Emperor Shah Jahan. It was designed by the Iranian architect Ustad Isha. The workmanship on the Taj is purely Indian. Taj Mahal was declared as a UNESCO World Heritage Site in the year 1983. 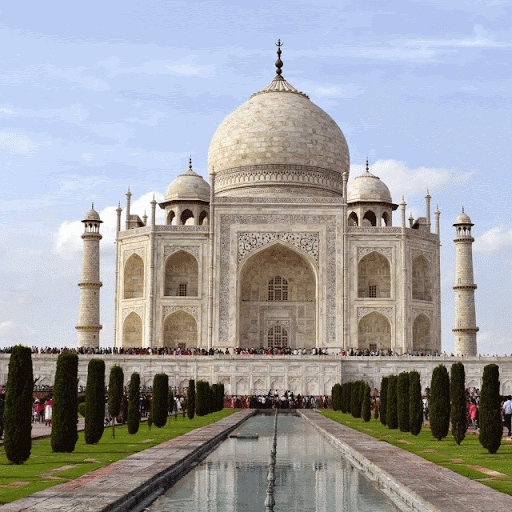 The main structure of the Taj Mahal is square and is beveled at its corner. The Taj Mahal is placed on a high plinth(platform). The plinth is 6.7m(21.98 ft) high and covers an area of 95 sq m (1022.57 sq ft). There are four elegant tapering minarets, one of each corner of the plinth. The height of each minaret is 41.6m (136.48 ft) and is capped by a small cupola. The minarets not only balance the main structure of the mausoleum but are also placed in such a way that in case of a mishap, they do not fall over the main edifice. Each pillar has a letter written on it, which put together spell the word ar-Rahman (all-merciful)-one of the names of Allah. Each side of the Taj Mahal is 56.6 m(185.69 ft) in length.

A central bulbous dome crowns the magnificent structure. The dome is further surrounded by four chhatris (domed canopy). The dome is an important component of the Islamic style of architecture, as it is believed to be a link between heaven and earth. The octagonal part symbolizes the transitional phase between heaven and earth. The dome is topped by a brass finial, whose tip rises to a height of 73 m above the ground. The entire structure of the dome is designated as a replica of God’s throne in paradise, where a gigantic pearl dome stands supported by four corner pillars. According to Islam, the river of grace flow through this dome. The outer walls of the Taj Mahal are decorated in a number of places with shallow marble craving apart from the elegant pieta durra work.

The entrance to the tomb leads to the central hall, which houses the false tombs and four small octagonal halls, grouped around it. The original graves are located in a crypt, which is directly below the central hall. The four smaller rooms were originally created for housing the graves of other members of the royal family. The tomb of Mumtaz Mahal, in whose honour the Taj was built, lies directly below the dome. The tomb is placed in such a manner that it is in direct alignment with the main entrance. The tomb of Shahjahan is larger in size and is placed next to that of his beloved queen.

It is said that there were almost 35 different types of precious and semi-precious stones used in the inlay work done on the Taj Mahal. Stones like turquoise, jade, agate, coral, lapis lazuli, onyx, bloodstone, carnelian, jasper, garnet, and malachite were used to decorate flowers like lily and honeysuckle. Carnelian and lapis lazuli were preferred for their colour and luminosity. Precious and semi-precious gems were brought from different sides of the world. White marbles were brought from makrana mines of Rajasthan, Crystal was imported from China, and Lapis Lazuli from Ceylon. Jasper came from Punjab, Carnelian from Baghdad, agate from Yemen, and the finest Coral from Arabia, Bundel Khan jewelers provided garnets and diamonds from merchants from 114000 cartloads of sandstone was provided by the former Mughal capital Fatehpur Sikri. 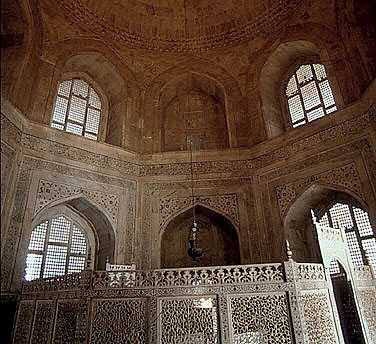 At that time construction of a foundation was a major problem for the Mughal builders. In order to support the whole load from the superstructure, the sand of the bank had to be stabilized as it is situated at the bank of river Yamuna. For this purpose, wells were dug, then cased wood, and finally filled with rubber, iron, and mortar used to act as a pile. According to different surveys and studies, it is known that “ebony’s wood” was used in construction, and wood fibers are dimensionally stable and moisture content is above the saturation point. The wooden part of the foundation lies well below the river Yamuna and it is the secret that the woods have still sufficient bearing capacity to carry the whole weight.

Some interesting facts about the Taj Mahal 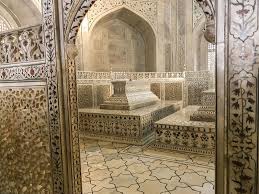 Fig 3: The tomb of the king and the queen

As a  UNESCO World Heritage Site, the Taj Mahal has always evoked varying emotions from wonder to ecstasy. Almost 351 years old, it still stands as a landmark in India. Every Indian takes pride in the beauty of the Taj Mahal and its heritage. Every year around 2 to 4 million people came to visit this monument. Over the centuries, it has become the symbol of undying love and flawless beauty.