The Colosseum, pride of Rome

Articles > The Colosseum, pride of Rome

It is situated in the city of Rome, Italy. It is the largest freestanding amphitheater ever built in the classical world. It stands as a monument of Roman engineering genius. The engineering required to build this monument was revolutionary. It took the genius of the Roman arch and they used it on a colossal scale. In 72 AD the emperor Vespasian began the construction and it was completed in 80 AD. The significance of the structure is the patronage of the Flavian dynasty, during whose reigns it was built. The Colosseum was built to provide a stage for gladiator events and other public shows like execution, dramatic performances, and mock battles. 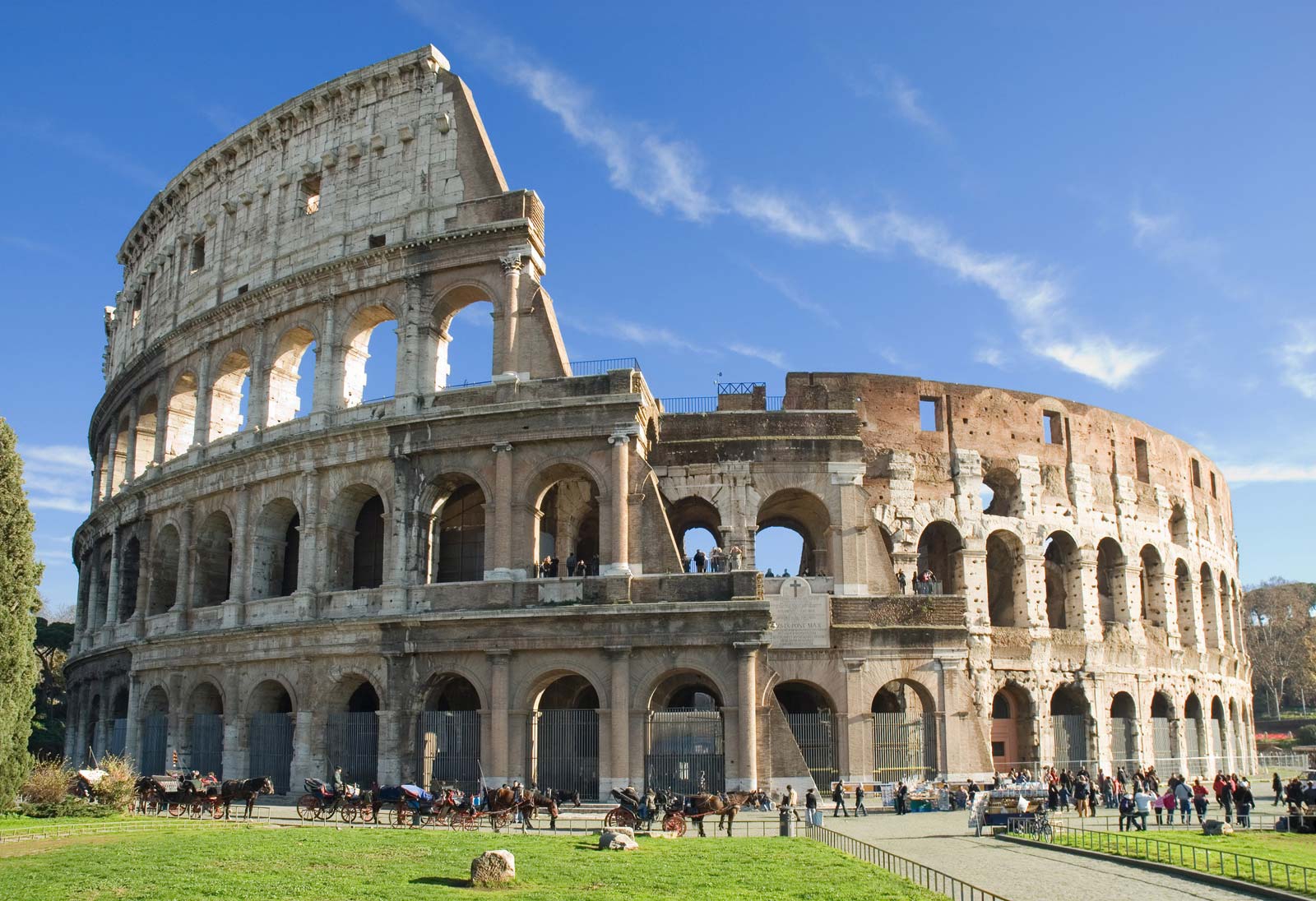 The structure and its construction

The exterior facade of the building consists of four levels. The bottom three levels are composed of 80 arches each. Because of the exterior arches, structurally it is possible in such an immense size. The Colosseum is an elliptical or oval-shaped building having a short axis of 156 m and a long axis of 188 m. It was 50 m in height, 190 m in length, and 156 m in width. Several materials were used to build the structure. For load-bearing pillars, travertine blocks were used, for external walls, stairs, and radial walls blocks and bricks of tufa were used. The structure is supported by arches and vaults solidly. According to some analysis, people told that Colosseum could accommodate around 50000 to 80000 spectators. There were 80 entries and exits in the structure, 76 were used by common people, and the remaining was reserved for the emperor, political and religious authorities. 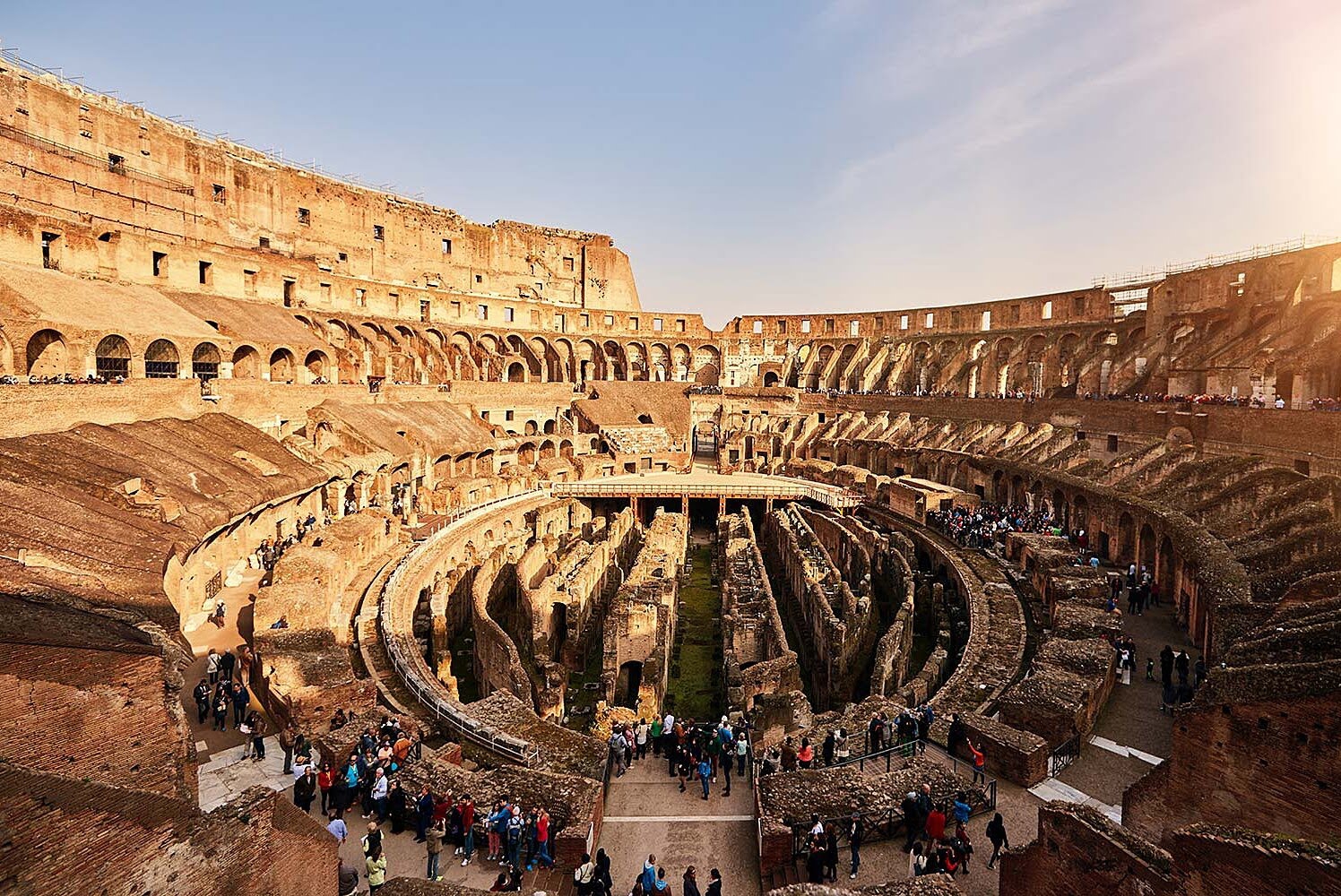 Fig 2: Interior of the Colosseum

The strength and durability of the structure were increased by the combination of concrete, stone, and sand used in the construction. The foundations were made of concrete. Around 100000 travertine stones were transported to Rome from the quarries of Tivoli. For this purpose, extra roads were constructed for ease of transportation. The base of the building is double-stepped. The first three stories have classical arcades and the top fourth storey has small rectangular windows. Arches located on the four axes of the building served as the main entrances and the remaining 76 arches were served to allow people to the seat. The architectural orders present in the design of the Colosseum can be recognized by the types of columns used. Half of the columns on the ground floor are Tuscan, the semi-columns on the second floor are Ionic and the third-floor columns are Corinthian. To provide cover and shade to the spectator from sun and rains, a retractable awning was suspended which was basically like a canopy. 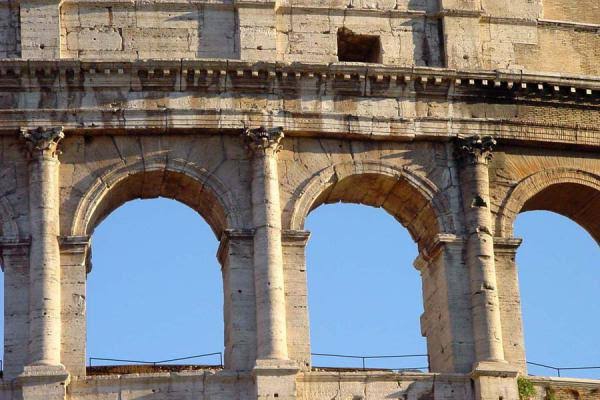 Fig 3: a close view of the arches

Courtesy: Around the World

There was a complex arrangement of rooms and passages, which were used to provide storages for animals and equipment that were used in the shows. This was located just beneath the wooden floor area.

During the medieval period, the Colosseum went through several changes. The building was used for housing and workshops were created in the vaulted spaces in the arcades and also rented to local people. Around 1200, the Frangipani family surrounded the building and used to live in it. They used it as a castle. In 1349, a devastative earthquake caused severe damages to the structure. Frequent lightning strikes and other earthquake worsen the situation. The outer south side was totally collapsed because of this earthquake. The south side of the building was built on alluvial unstable ground. Pope Benedict XIV in 1749 declared the building was a sacred site. He told that was a place where early Christians had been martyred by Romans. After this, the building was banned for its use for commercial purposes.

Various stabilization techniques were applied by succeeding rulers to restore the monuments. These include the removal of vegetation that had been allowed to take hold inside the amphitheater. The front side of the building was repaired by using triangular brick wedges. The repair works were carried on the interior part over subsequent years. Between 1993 and 2000, a major restoration project was carried out. The project was to tackle the adverse effect of rainwater and pollution which affects the beauty of it.

The Flavian Amphitheater was one of the most happening places in the World. The Gladiator fights are the most iconic of all the events that used to take place in the area.it presented a joyful sport for the Romans when two gladiators fought each other to the death, hurting each other. Wild animal hunting was another famous event for the Romans. For different performances, exotic animals from Africa and the Middle East were brought. The Gladiators hunted fierce animals and other participants. The games were equally gory, heinous, and cruel. The games were held for tens of days frequently.

But the most wonderful events were the enactment of sea warfare. The area was filled with water and specially trained horses. Oxen were used in the battle. Under great emperor Titus, sea battles were held at the initial. Other than showcasing the social prestige and the might of Roman Emperors, the Colosseum fulfilled many other purposes.

As of today, the Colosseum is the most visited monument in Italy. It is the symbol of the power and prestige of Rome. It is one of the main tourist attractions in the World. Every year about 4 million people visit this monument. In modern times, the Colosseum is also a site for Christian ceremonies. The size and scale of the monumental of the Colosseum as well as the design for accommodation and control of such a large crowd indicate it as one of the greatest architectural achievements of the Roman era.