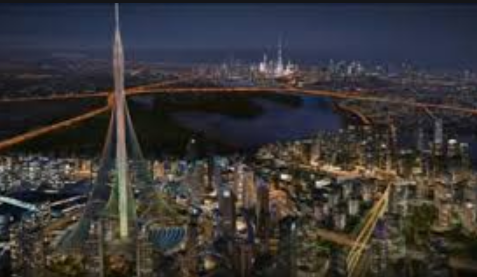 Origin of the concept of tower/burj of Creek:

Aurecon, the engineering firm working on the project stated that Dubai's new tallest tower will emit a 'beacon of light' from its peak at night. At the top will be an oval-shaped bud, housing ten observation decks, including The Pinnacle Room, which will offer 360-degree views of the city, according to a statement from engineering firm Aurecon, which is working with Spanish architect Santiago Calatrava on the project. "The Tower will test the craftsmanship of Aurecon as we play our part in making a mark on the built fabric of mankind," said Adrian Jones, Aurecon's project director for The Tower. "It is an absolute privilege to be entrusted by Santiago Calatrava and Emaar Properties to work on this project, and we have assembled a stellar team to bring this idea to life." The design includes a distinctive net of steel cable stays that attach to a central reinforced concrete core that will reach into the sky.

Emaar Properties chairman Mohamed Alabbar described the new project as an "elegant monument" which is going to add value to property being developed by the company along the city's creek. "The tower will be slender, evoking the image of a minaret, and will be anchored to the ground with sturdy cables.

On 15 January 2017, a revised model of the original design was displayed at the Sales Center of the complex. The Observation deck height and the floor count was increased.

In February 2017, a rendering of the Tower appeared, which depicted it as a building supported by cables. Also, in one article, it was announced that the name of the tower will be Creek Tower.

In October 2016, Mohammed bin Rashid Al Maktoum attended the groundbreaking for the tower which began the tower's construction with the planned opening being in 2021.

A video showing the construction so far was released in August 2017. In May 2018, the foundations for the Tower were completed.