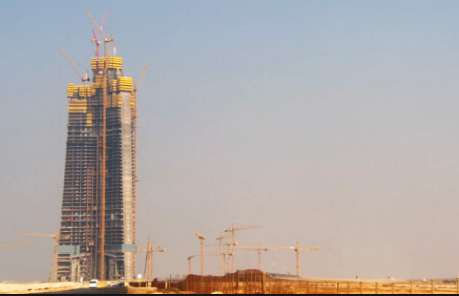 The former name of the Jeddha Tower is the Kingdom Tower of Jeddah. Jeddah Tower is a a skyscraper building located in the north region of Saudi city Jeddah. It has been planned to be the world’s first one kilometer or 3281 feet high building and to be the center of world tourism. It was also planned to be the tourist attraction known as Jeddah Economic Center, which was formerly known as Kingdom Economic City.

The design of the Jeddah tower building was made by an American architect namely Adrian Smith, who had also designed the building of Burj Khalifa, and which incorporates many distinctive features of design and elegance of the tower. The founder father and leader/owner of this project is the Saudi Arabian prince Al-Waleed bin Talal, who is the grandson of Ibn Saud, and the nephew of the Saudi Arabian king. Al-Waleed is chairman of the Kingdom Holding Company (KHC), in partnership with Jeddah Economic Company (JEC), which was established in 2009 to develop Jeddah Tower and City.

Features of the Jeddah Tower:

Technical Details of the Tower:

In May of year 2008, a soil test in the planned area cast doubt on the suggested location of the one-kilometer high-rise building, and according to the report of MEED, the length of the tower had been reduced, limiting it to "500 meters (1,640 ft). Statements about starting the construction very soon have been made since 2008. According to the statement of August 2011, the construction would be completed by no later than December 2016. Only if construction had started immediately and gone smoothly it could be achieved by the end of 2016.

The reports released in 2009 suggested that the scheme was canceled because of the impact of the 2008-2009 global financial crisis on Saudi Arabia and that Bechtel (a former engineering firm) was "on the verge of terminating its involvement in the project." The Kingdom Holding Company immediately criticized the news reports, insisting that the project had never been suspended.

The architecture of the Building:

In March 2010, Adrian Smith of Adrian Smith + Gordon Gill Architecture (AS + GG) was selected as the preliminary architect (though they deny involvement in the earlier, mile-high designs). Later, when the proposal was more serious, they won a design competition between eight leading architectural firms including Kohn Pedersen Fox, Pickard Chilton, Pelli Clarke Pelli, and Foster + Partners, as well as the firm Smith formerly, worked for Skidmore, Owings and Merrill, which was the final competitor in the competition before AS + GG was chosen. In addition to Burj Khalifa, Adrian Smith has designed several other recent towers; the Zifeng Tower in Nanjing, China, the Trump International Hotel & Tower in Chicago, and the Jin Mao Tower in Shanghai, as well as the Pearl River Tower in Guangzhou, China. The four buildings are all among the top eleven tallest in the world. Furthermore, the Pearl River Tower is a unique tower that was originally designed to use zero net energy by drawing all its needed power from wind, sunlight, and geothermal mass, though this design goal was not fully achieved.

In October 2010, the owners (Kingdom Holding Company) signed a development agreement with Emaar Properties PJSC. The final height of the building was questionable, but it was still listed to be over 1 kilometer. Kingdom Holding said construction was progressing.

Designs for the foundation were in place by early August 2011 and the contract for the piling was tendered. On 16 August 2011, Langan International officially announced their involvement and that the foundation and piling had to be uniquely designed to overcome subsurface issues such as soft bedrock and porous coral rock, which normally could not support a skyscraper without settling. The foundation is similar to that of the Burj Khalifa but larger; it is expected to average around 4.5 m (15 ft) deep with a concrete pad of area around 7,500 m2 (81,000 sq ft). The concrete must have low permeability to keep out corrosive saltwater from the Red Sea. Its depth and size are also considered to be an indicator of what the tower's final height will be. The piles will be up to 200 m (660 ft) deep and the pad over 90 m (300 ft) across, yet the building, which will weigh over 900,000 tonnes (890,000 long tons; 990,000 short tons), is expected to settle. The idea is that it settles evenly enough so that the building doesn't tip or put undue stress on the superstructure. Computer modeling programs performed tests at the site to confirm that the foundation design would work. A later design for the foundation, to be constructed by Bauer in 2013, calls for 270 bored piles up to 110 m (360 ft) deep which have to be installed into the difficult ground conditions. Some materials needed for the structure are 500,000 m3 (18,000,000 cu ft) of concrete and 80,000 t (79,000 long tons; 88,000 short tons) of steel.