Burj Khalifa, the Tallest structure in the World

Articles > Burj Khalifa, the Tallest structure in the World

Being the tallest building in the world and its beauty attracts anyone in the world. The edifice is located in Dubai, United Arab Emirates. With a total height of 829.8 m, the Burj Khalifa has been the tallest structure in the world since 2010. The building was built within a period of 6 years. The construction began on 6 January 2004 and ended in the year 2010. The building was earlier known as Burj Dubai but was renamed in honor of the ruler of Abu Dhabi and the president of the UAE, Khalifa Bin Zayed Al Nahyan.

Adrian Smith is the man for the structural and architectural design of Burj Khalifa. This was originated forms a tri-lobed mostly ignored desert flower named HYMENOCALLIS. The tower is composed of three elements arranged around a central core at the base, twenty-six helical levels and it is gradually decreasing towards the top. The tip of the sphere of Burj khalifa can be viewed from 95 km away.

As the skyscraper has a floor plan of” Y” shape, this plan gives higher performance and provides a full view of the Persian Gulf. Due to the integration of aerodynamic shaping and the plan, the structure can reduce the effect of wind forces. The central core has a higher resistance to torsion. The total floor area of the building is 460000 sq meters. The whole structure is designed as a reinforced concrete building with High-Performance Concrete up to level 156 and up to the top it is designed as a structural steel braced frame. The C80 and C60 cube strength concrete is used with fly ash, portland cement, and the local aggregates. A Young’s Modulus of 43800N/mm2 is said to be granted by C80 concrete. The largest pumps in the world were used to pump concrete up to a height of 600 m at a single step.

Foundation of the building

The superstructure is built over a large Raft Foundation system. The raft is again supported by concrete piles. The Raft has a thickness of 3.75 m and was constructed in separate pours. the reinforced concrete raft foundation utilizes high-performance Self Compacting Concrete(SCC) and is placed over a 100 mm blinding slab over a waterproofing membrane. The bottom and all the sides are protected by a waterproofing membrane. The concrete volume used in the raft is a 12500-meter cube. The number of piles was 194. The piles were 1.5 m in diameter and has a length of 45 meters. Each pile has a capacity of 3000 Tonnes. A cathodic protection system for both the bored piles and the raft foundation has been given to protect the foundation against severe and corrosive environment harmful chemicals. 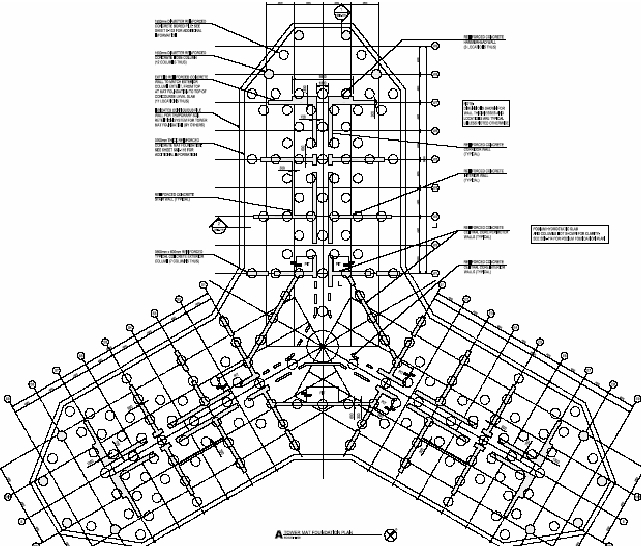 Construction of the Superstructure

To complete the project within 48 months, the construction companies like Samsung, Besix, Arabtec Joint Venture (SBAJV) followed a strategic approach.

The whole area of the building encompasses the office area, pool area, and parking area. It was divided into three areas. viz, Zone A, Zone B, and Zone C. The site logistic works and planning works were constantly evolving to reflect ongoing construction activities.

The tower is consisted of 163 floors and followed a very tight schedule of a 3-day cycle. The key construction Technologies are-

The skyscraper is built with reinforced concrete and glass cascade. The tower is raised from a flat base. The setbacks at each point are arranged in such a spiraling way that it reduces the dead load of the structure and reaches the sky. The Y shaped pattern reduces the wind force. Each wing with its core and the column emerges via a six-sided central core. As a result, the tower is very stiff torsionally. At each storey building height changes, it goes on decreasing to top. The advantage of the steeping and shaping of the tower is to confuse wind force. The wind never gets to act upon the structure as it encounters different shapes in each tier. Dubai can be hit by sandstorms and winds to a speed of 100 km/hr which is a big problem for the skyscraper. When the wind swirls around the building it forms vortices, Every building has its natural frequency. On a perfectly symmetrical flat-faced skyscraper, the wind can work with the natural frequency which we called resonance. It could cause to sway more and more until it fell over. So the skyscraper is built radically different than other structures. In Burj Khalifa, as we go up, there are 27 different shapes. Each of them generates vortices differently from the ones above or below it. Because of this wind never gets organized. That’s why we never get really large forces in the building. 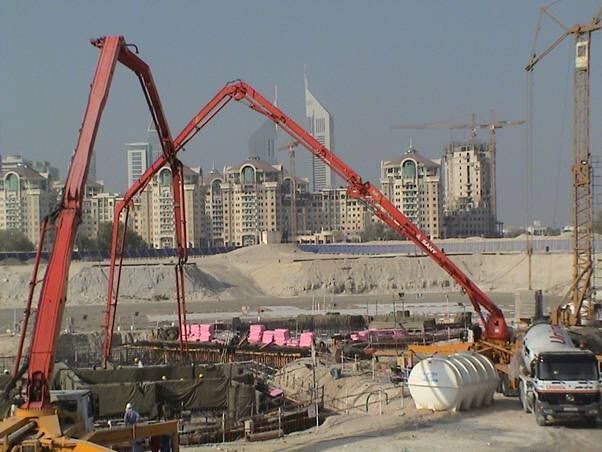 Selection of the right equipment ensures delivery of material easily and quickly and it increases the work efficiency. As the project was a broad project, close coordination of various trades, throughout the construction period required careful planning, handling, scheduling, and regular inspection. The process of selecting the equipment for this project was extensive. three high-capacity self-climbing tower cranes were used and were located at the center core of the tower. Tower Main Hoist was installed in three different phases following the construction sequence of the tower. Additional jump hoists were installed as per the specification. Three major Concrete Pumping Equipment placed at the ground level during construction. With this horizontal pumping, pumping of concrete vertically and under different environment was possible.

The lift of the pinnacle occurred in three steps-

With the advancement of the Technology of concrete, the latest development of material technologies, structural engineering theories, wind engineering, seismic engineering, computer technologies people can reach the peak. Prior to this edifice, nobody could have dreamed of creating a record-breaking structure using concrete. The Burj Khalifa project demonstrates the latest development of the construction field. As of today, the Burj Khalifa is the tallest man-made structure, a landmark in the world in all categories and also it has paved the way for further development in high-rise construction throughout the world. The Burj Dubai Project is another step forward in meeting the technological challenges in future construction.