Different types of Dams and how to locate a dam?

Articles > Different types of Dams and how to locate a dam?

The dam is the name of a huge barrier constructed in the way of flowing water to resist its flow and to raise its level up. Dams are constructed on natural streams and rivers. The purpose of the dams is to reserve water for the time of need and to prevent flooding. The ratio of rainfall does not remain uniform all through the year. During the months of high rainfall, streams bring much water, which may overflow from the streams and caused floods, while at the time of low rainfall, the water quantity of streams and rivers decreases up to a remarkable level. To main an equal supply of water all through the year, dams are constructed. Dams store extra water and supply the stored water at the time of need. 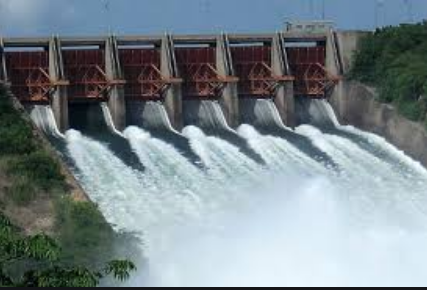 The typical purpose of the dams is to store water for irrigation. But with the gradual advancement, some other significance of the dams was also discovered, like prevention from flooding, generation of electricity, protect aquatic life, etc.

Types of dams by Structure:

The classification of dams is made on the basis of the construction method. Following are the most common types of dams:

A masonry dam is constructed with the help of masonry of bricks and stone blocks. This type of dam has a very large span foundation. Architects and mason work on such types of dams. The design and the map of the dam are first drawn, and architectural work starts. Each part of the dam like water retaining structure, water releasing structure, and water conveying structure is made by hands. Heavy machinery is seldom used while constructing a masonry dam. However, the need for scaffolding and shuttering is felt as the masonry work gradually, rises up. 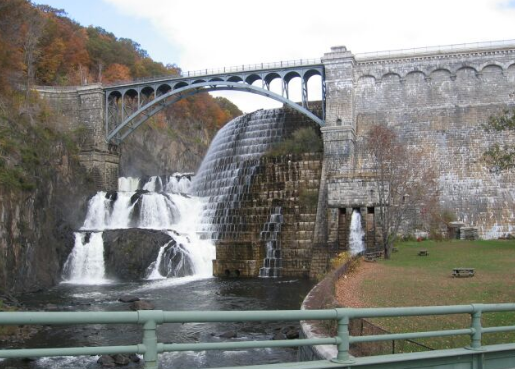 A steel dam is either made of the horizontal and vertical girders and beams supporting panels and plates made up of steel/ iron or some other alloys which resist rusting and oxidation. The plates are joined with the vertical and horizontal girders with the help of nuts and bolts. In many dams, steel trusses are also used instead of girders. The durability and strength of these dams is much better than that of the rest of the types. These are easily constructed and less time-consuming. 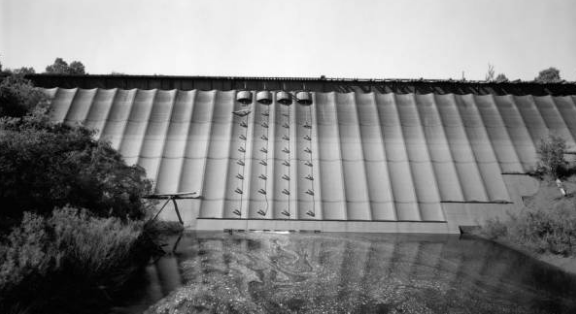 This is a very low-priced dam and very common in Asia, Africa, and South America. The casing of this dam is made of stone gravels, sand, soil, and murum. Once the water is absorbed in the dame, the volume of the casing shrinks due to gravity. The shrunk volume further compacts the material of the dam. The contracted volume does not allow the water to seep across the dam. World’s largest earthen dam is Pakistan’s, Tarbela Dam. 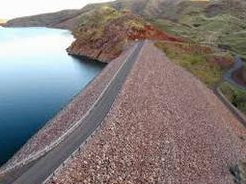 The barrier to the water is so designed that it holds back the water by its weight. The horizontal push of the water is exerted against the wall. The water tends to push away the wall, but the heavy and wide span of the foundation of the dam holds the water back. The gravity or the weight of the wide span wall is the only reason for its success. 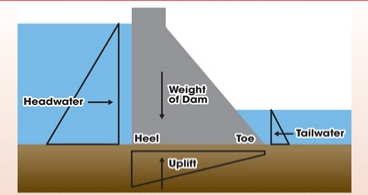 An arch dam is constructed with concrete. The design of the dam is curved and concaved from downstream and convex from upstream. The curved shape of the dam gives tension against the hydrostatic pressure of the reservoir. The sides and edges of the dam are deep-rooted for a strong foundation. 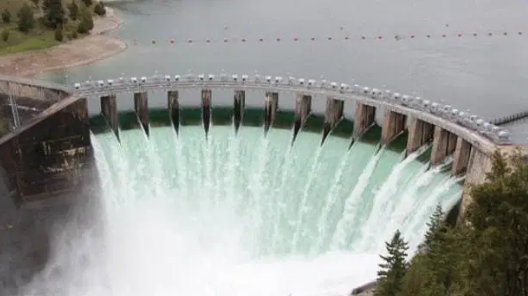 Embankment means an artificial mound of earthen material, soil, and debris. But in an embankment dam, the construction material is a semi-plastic material of sand, soil, stone gravels, and debris. The mound of the semi-plastic material works as the dam. The material is compacted by means of machines like compactors and rollers. This type of dam is successful because of its large span and bottom. In the beginning, the water starts absorbing in the dumped material. The absorption of the water further strengthens the bonding of the material.

A barrage dam is so designed that there is a series of gates that are suspended with the abutments. The suspended gates are allowed to sink in the water to resist the flow of water. The difference between a barrage dam and other dams is that this type of dam resist the water from the upward direction, while in other types of dams the resistance is provides

CFRD is a very common type of dam, which is widely constructed all through the globe for hydropower projects. Concrete slabs are placed on the underlying rock fill. The concrete slabs are connected with the toe plinth by means of peripheral joints so as to develop an impermeable system.

The purpose of the fixed crest dams is to elevate the level of the river and keep the channel deep enough for navigation. It is a straight crest wall, which runs across the river. These dams have no spillway, no gates, and no bridges. They are submerged in the water and can not be easily found from a watercraft. 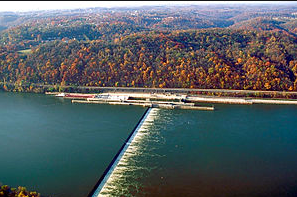 As in the above headings mentioned,

An Arch-Gravity dam is a combination of both of the above dams. This type of dam has characteristics of an Arch and Gravity dams.

Types of Dams by Size:

There are two types of a dam on the basis of size;

Small dams are the dams that are constructed for the purpose of storing water for small-scale irrigation, and industrial and household use. Occasionally, small electric generators are also installed at these dams. These dams are constructed in thousands of numbers in almost all the countries of the world.

Non-jurisdictional dams are the dams that do not follow the legal limitation. Extra-large dams, which, legally, are not allowed to construct, are included in Non-jurisdictional dams. The illegal status of such dams is because of the risk of flash flooding associated with such dams. Almost all over the world, and in all of the world countries, such dams are available to be seen.

Types of Dams by Use:

A weir dam also called an overflow dam is a type of small overflow dam that is often used within a river channel to create an impoundment lake for water abstraction purposes and which can also be used for flow measurement or retardation.

A check dam is a small barrier against the flowing water of a stream, water channel, drain, and unpaved canals. The purpose of such dams is to protect the floor of the channel from erosion.

Controlling the floods dry dams are constructed. Dry dams typically contain no gates or turbines and are intended to allow the channel to flow freely during normal conditions.

A diversionary dam is intended to divert all or a portion of flowing water. These dams are constructed for the sake of diverting the water. The water is diverted in order to protect soil eroded by the flowing water.

Fukuzato (Japan) is the world’s biggest underground dam. An underground wall is constructed to prevent the groundwater to seep into the sea so that it can be put to human use.

A tailings dam is typically an earth-fill embankment dam used to store byproducts of mining operations after separating the ore from the gangue. Tailings can be liquid, solid, or a slurry of fine particles, and are usually highly toxic and potentially radioactive.

Types of Dams by Material:

In a timber dam, wooden panels, logs, and pillars are used to construct the water retaining structure of the dam. Timber Dams are generally of small sizes. These dams are unable to resist a large flow of water. On small water channels and streams, these dams are successful. These dams are easy to construct.

It includes all types of dams are constructed by using steel as the construction material. The steel wall is made up of steel panels, plates, girders, truss, and beams. These objects are jointed with each other with the help of nuts and bolts.

Any dam can be called an earthen dam if its construction material is composed of soil, sand, debris, and stone gravels. The earthen material is used in the construction of such dams. These dams are generally very large in size and big energy plants are installed over such types of dams.

As the name mentions, a rockfill dam is constructed with a piece of rocks ranging from a small to a large size. The rock pieces are compacted with soil and sand and fine earthen gravels. Any type of dam which is constructed with rock gravels can be included in the list of rock fill dams.

Other Types of Dams:

Cofferdams are constructed inside the water body. These are temporary barriers against or diversion against the flowing water, in order to carry out construction work in a dry environment. Cofferdams are as water-tight as possible because the aim of a cofferdam is to provide a dry work environment. In a dry and clean environment, the concrete work is carried out without the leakage of water from outside. When a cofferdam is installed the muck is sucked by means of a muck tube or muck vessel. The muck inside a caisson is also evacuated in the same way. Cofferdams

Beaver dams or beaver impoundments are dams built by beavers to provide ponds as protection against predators such as coyotes, wolves, and bears, and to provide easy access to food during winter.

It is a naturally constructed dam. As a result of a landslide, the material becomes an obstacle before the water channel, a dam is formed. In any case, a sedimentary rock appears (after a long time erosion of the floor of the stream) before the way of the water channel. The sloped sedimentary rock acts as a dam. These dams are generally very small in size, but frequent to be seen.

Where to locate a Dam?

One of the best places for building a dam is a narrow part of a deep river valley; the valley sides that can act as natural walls. The primary function of the dam's structure is to fill the gap in the natural reservoir line left by the stream channel. The sites are usually those where the gap becomes a minimum for the required storage capacity. The most economical arrangement is often a composite structure such as a masonry dam flanked by earth embankments. The current use of the land to be flooded should be dispensable.

Significant other engineering and engineering geology considerations when building a dam include: