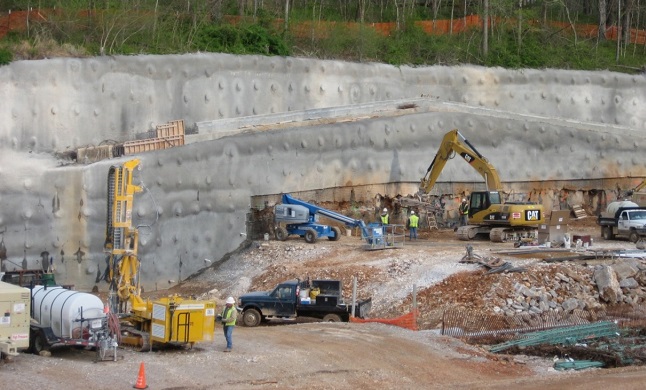 Soil nail walls can be used in the following roadway applications:

Soil nailing is attractive in roadway cuts because a limited excavation and reasonable right-of-way (ROW) and clearing limits are required. These factors help to reduce the environmental impacts along the transportation corridor. The impact to traffic may also be reduced because the equipment for installing soil nails is relatively small. Variations in the details may exist, particularly to those details related to runoff control.

Soil nail walls can be advantageous for underpass widening when the removal of an existing bridge abutment slope is necessary. While the cost of installing a soil nail wall under a bridge abutment may be comparable to that of other applicable systems, the advantage of soil nailing is that the size of the soil nail drill rig is relatively small. Soil nailing equipment can operate within limited overhead, and traffic flow along the underpass road may not need to be totally interrupted during the widening. The location, length, and inclination of soil nails need to be carefully planned so that the nails do not interfere with the existing bridge girders and do not intersect the existing abutment foundation. The upper soil nails must be positioned within the clear space between bridge girders and must be parallel to them. The remaining, lower rows of soil nails must be positioned and oriented to avoid hitting the foundation elements below.

Vertical micropiles and soil nails have also been used in modified abutments for road widening projects where an existing bridge was originally supported on shallow foundations constructed on top of an existing embankment. The micropiles support the modified abutment and prevent settlements, as they transfer bridge loads below the new road grades. At the same time, the added soil nail wall retains the excavated soil. Because overhead clearances are small in most roadway widening projects, the combined use of soil nails and micropiles is attractive in these applications as they can help expedite construction by allowing the bridge to remain operational during widening of the underpass lanes.

Tunnel portals can also be stabilized using soil nails. Although the principle behind the use of soil nails in tunnel portals is similar to that for road cuts, other aspects must be considered in the design and construction of this application. First, the vertical stability of the shotcrete facing above the tunnel must be considered. The potential transfer of soil nail loads to the tunnel structure at the portal must also be taken into account. The interaction between soil nails and the initial shotcrete support and lining of the tunnel near the portal need to be fully evaluated. In addition, the layout of soil nails may be different than that in the conventional use in roadway applications. Soil nails must be installed with an appropriate horizontal splay and a suitable vertical orientation to avoid interfering with the tunnel support components.

Soil nails can be used to stabilize and/or strengthen failing or distressed retaining structures. For example, some mechanically stabilized earth (MSE) walls may exhibit excessive deformation due to poor design, poor construction, or both. Soil nails can be installed directly through the face of an MSE wall if the existing face is sufficiently stable to resist drilling. As the MSE wall continues to deform, the backfill of the MSE wall and its facing would
transfer loads to the installed soil nails, and these would transfer loads to stable soils lying behind the MSE-reinforced block of soil.

Of particular concern in these cases is the use of appropriate drilling and grouting procedures. These procedures should not be detrimental to the stability of the existing MSE wall, and should create a stable drill hole through the wall backfill and through any drainage material placed at the back of the MSE wall.  In some cases, it may be necessary to stabilize the MSE wall face before the start of drilling to prevent partial or total collapse. Similar considerations apply to the use of soil nails in the stabilization of crib walls, gabion, and masonry walls.

The selection of an appropriate bearing plate to support soil nails stabilizing MSE and masonry walls is very important. The bearing plate must be able to fully transfer loads without damage to the existing facing. In some cases, consideration of the maximum load at the bearing plate may control the design.

Soil nail walls can be used with other types of wall systems such as ground anchor walls and MSE walls to combine the advantage of each method. This situation may arise for walls with a complex layout or when the costs associated with other earth-retaining systems are too high. The combination of MSEand soil nail walls may provide a more economical design in cut/fill situations than the traditionally used full-height MSE walls or drilled shaft retaining walls.

Another example of a hybrid soil nail wall is the combination of soil nails with ground anchors. This application may be used in areas where utilities or other underground obstructions exist and do not allow soil nails to be installed in the upper sections. In such a case, the wall facing can be designed to work in cantilever in the upper 8 to 10 ft, with one or two rows of ground anchors providing horizontal restraint at the bottom of the cantilever. Soil nails are used in the rows below.

Soil nails are not generally well suited to address instability along deep-seated slip surfaces. Where there is potential for deep-seated instabilityof a proposed roadway cut, ground anchors can be introduced in combination with soil nails. Soil nails may also be used for tiered walls to support the top of the slope, where one or two rows of relatively long ground anchors would intersect the slip plane and provide global stability.

Soil nail walls have been increasingly used in combination with MSE walls for widening low-volume roads by fill placement in steep terrain. MSE wall construction in steep terrain requires excavation to establish a flat bench to place the soil reinforcement. The required depths of embedment increase with the steepness of the slope below the wall toe. If the slope is too steep, the excavation for the MSE wall becomes impractical, particularly in situations where traffic must be maintained during construction of the widening. Soil nail walls can be used as shoring to stabilize the backslope (or back-cut) first, and then allow the construction of a conventional MSE wall in front of the soil nail wall. If the soil nail wall is designed as a permanent wall, nails can significantly reduce the longterm lateral pressures on the MSE wall. This configuration is known as an SMSE wall.