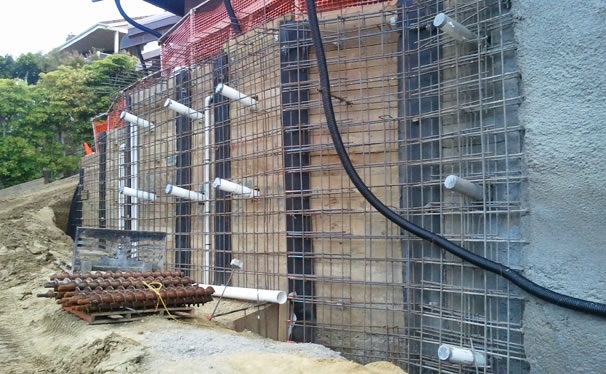 The origins of soil nailing can be traced to a support system for underground excavations in rock referred to as the New Austrian Tunneling Method. This tunneling method consists of the installation of passive (i.e., not prestressed as for ground anchors) steel reinforcement in the rock (e.g., rockbolts) followed by the application of reinforced shotcrete. This concept of combining passive steel reinforcement and shotcrete has also been applied to the stabilization of rock slopes since the early 1960s. This ground-support technique relies on the mobilization of the tensile strength of the steel reinforcement at relatively small deformations in the surrounding ground. This support is enhanced by the continuity of the shotcrete. The combination of passive reinforcement and shotcrete when applied to soil, in lieu of rock, is termed soil nailing.

One of the first applications of soil nailing was in 1972 for a railroad widening project near Versailles, France, where an 18-m (59-ft) high cut-slope in sand was stabilized using soil nails. Because the method was cost-effective and the construction faster than other conventional support methods, an increase in the use of soil nailing took place in France and other areas in Europe. In Germany, the first use of a soil nail wall was in 1975. The first major research program on soil nail walls was undertaken in Germany from 1975 through 1981 by the University of Karlsruhe and the construction company Bauer. This investigation program involved full-scale testing of experimental walls with a variety of configurations and the development of analysis procedures to be used in design. In France, the Clouterre research program, involving private and public participants, was initiated in 1986. This research effort consisted of full-scale testing, monitoring of in-service structures, and numerical simulations.

History of Use and Development in the United States

Pioneering applications of soil nail walls in North America were for temporary excavation support in Vancouver, B.C, Washington, D.C. and Mexico City, Mexico in the late1960s and early 1970s. One of the first published applications of soil nailing in the United States was the support of the 13.7-m (45-ft) deep foundation excavation in dense silty lacustrine sands for the expansion of the Good Samaritan Hospital in Portland, Oregon in 1976.  The construction of the retaining system was reportedly conducted in nearly half the time and at about 85 percent of the cost of conventional excavation support systems. In 1984, a prototype soil nail wall 12-m (40-ft) high was built near Cumberland Gap, Kentucky, as part of a demonstration project funded by the U.S. Department of Transportation Federal Highway Administration (FHWA). In 1989, the Oregon Department of Transportation built an 8-m (24-ft) high wall as the first application of a soil nail wall used in a bridge abutment cut wall (end-slope removal). In 1988, a 12.2-m (40-ft) high, 2-tiered wall was built along Interstate Highway 78, near Allentown, Pennsylvania. Each wall tier was 6.1-m (20-ft) high with a 3 m (10 ft) horizontal offset and was built in colluvium and highly weathered rock. Other examples of early uses of soil nail walls include those built along Interstate 10 in San Bernadino, California; Interstate 90 near Seattle, Washington; and along George Washington Parkway (Interstate 495) in Virginia.

The more widespread use of soil nail walls today is due in large part to the efforts of FHWA through the Office of Research and Development. The first FHWA document on soil nailing was issued through FHWA’s Office of Research and Development. The objective of this first document was to disseminate information to U.S. highway agencies and practitioners on the use of this technique as a retaining system in highway projects. In 1992, FHWA sponsored two-week long technical tours by various U.S. experts to France, Germany, and England. The objectives of the tour were to: (1) learn the then current European state-of-the-practice in soil nail wall technology; (2) update the available information on the mechanisms of soil nail wall performance, design approach, and computer programs; and (3) gather up-to-date construction specifications, corrosion protection details, and information and appropriate contracting practices. These efforts provided the basis for establishing subsequent research and development activities in the United States. In1993, FHWA sponsored an English translation of the French practice summary on soil nailing. In 1994, a Soil Nailing Inspector’s Manual was issued. Also in 1994, FHWA launched Demonstration Project 103 (Demo 103) to disseminate further the use of soil nail walls among state highway agencies.

From 1996 to 1998, FHWA and local agencies sponsored workshops around the country to provide guidance for the practice of soil nailing. Documents developed for Demo 103 served as a preliminary design guide and subsequently evolved as a design manual. FHWA also funded various research projects in academic institutions.