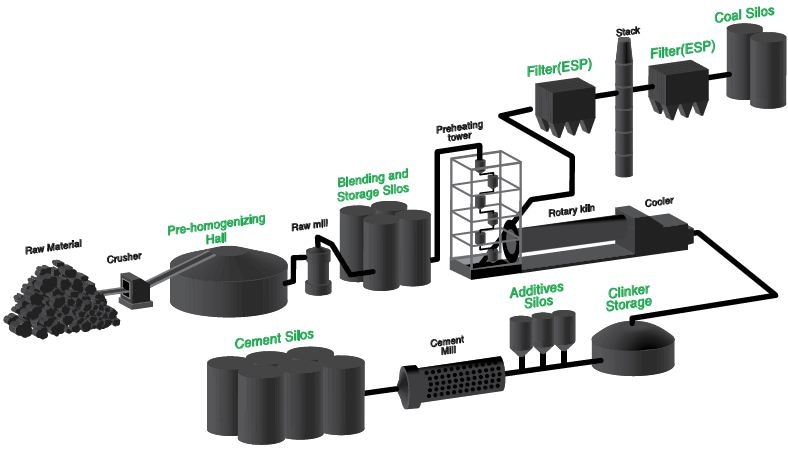 The production processes of conventional and nonconventional concrete involve the selection and preparation of source materials, the mixing and blending of raw materials (including cement binders) in controlled amounts, the
delivery of blends either as slurries or dry mixes, and the placement of the mixes, usually as slurries, into forms or machines for final net-shaping. Every aspect of the production process must be controlled to optimize performance and properties, and higher levels of process control than are currently available will be required for nonconventional concrete technologies. Four major aspects of processing require improved control: feedstock production, hydration, concrete mixing, and fiber mixing.

Even apparently small variations in the dry cement feedstock (e.g., chemistry, particle size) can cause large changes in the resulting concrete. Essential is an understanding of the effects of materials variability on the course
of reaction so that the quality control factors can be specified. The initial procedures must be controlled in order to provide a known base for the process activities that follow. In Denmark, for example, the cement industry aims at producing a uniform cement strength at a specified age (e.g., 7 and 28 days). This is accomplished by intensive quality assurance efforts in feedstock production and through close attention to fineness, size distribution, and
grinding temperature during the grinding process. The concrete producers apply tight rheological controls of the cement and cement paste to achieve a consistent and conforming end-product.

If clays are to be added to the mix, they can be added dry or as slurry. It should be noted that ASTM specifications set limits to the amount of clay that can be beneficially used in concrete. Popovics discusses some of the potential problems. The heterogeneous reactions of clay with liquids, for example, are difficult to control. The most common method is for the clay to be predispersed in a slurry, as is the case for the micro-silica additions that are used to improve the matrix. Modified clay can also be mixed with a plasticizer. A nonwetting agent could be used to improve the mixing of fine powders. These processes might benefit from the separation of the reactive part of the mixing from the rheological part of the placement.

Accurately measuring the water content of the aggregates in bulk is a persistent problem in the production of concrete and can cause mix deviations and placement problems. This problem is compounded by the difficulty in
accounting for the various shapes found in huge quantities of aggregates in finetuning mix designs and blend behaviors.

The ceramics industry has developed numerous devices for the preparation and mixing of powders, such as twin-vee mixers, attritor mills, and ball mills. One novel approach to cement feedstock production would be to ball mill the powders, using the aggregate itself as the milling medium. Thus, the mixing media would not have to be separated from the powder at the conclusion, and the mixing balls would be free. A disadvantage to dry ball milling in conventional concrete is that the rough aggregate would be rounded somewhat. In a nonconventional concrete, however, this type of milling might lead to better pouring properties and less particle–particle interaction among the chunks of aggregate.