4 Types of Caissons and their Pros and Cons

Articles > 4 Types of Caissons and their Pros and Cons

Caisson is a word borrowed from French caisson, derived from Italian Caisone, which means a very large box. It is very important technique of geotechnical engineering to build underwater structures. For example the columns of a bridge, underwater foundations, repairing ships and for the construction of water dams. A Caisson is a very large box which is watertight with a muck tube. This large box is place in the water and then, the debris and muck is evacuated by means of the muck tube. After getting the caisson empties, the workers and engineers enter the caisson and start the work with ease. Thus, the function of a caisson is to keep the work environment dry. 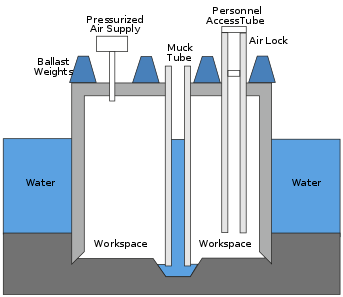 What are the Caissons are made of?

A caisson is installed under the water in a way that it is not placed on the soft mud, but it is brought down through soft mud until a suitable hard and viscous mud is encountered. The best material for a caisson is a bed-rock. In case, a bed-rock is too deep, it is, then, placed on hard mud, so that the muck could not enter through the bottom of the wall of the caisson. There are four types of Caissons.

A box Caisson is made up of pre-fabricated concrete with sides and bottom. It is placed down on the prepared foundations. After placing down, it is filled with concrete material and left mantled for ever. It becomes the part of the structure like foundation for a bridge pier. A hollow concrete structure is lighter than water and floats on water. Therefore, before adding concrete to the box, it is bassalted or anchored to keep it from floating. Sometimes elaborate anchoring systems may be required, such as in tidal zones. Adjustable anchoring systems combined with a GPS survey enable engineers to position a box caisson with pinpoint accuracy. 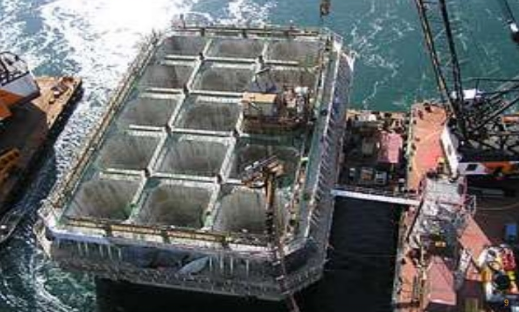 An open caisson is similar to a box caisson, except that it does not have a bottom face. It is suitable for use in soft clays (e.g. in some river-beds), but not for where there may be large obstructions in the ground. An open caisson that is used in soft grounds or high water tables, where open trench excavations are impractical, can also be used to install deep manholes, pump stations and reception/launch pits for micro tunnelling, pipe jacking and other operations.

A caisson is sunk by self-weight, concrete or water ballast placed on top, or by hydraulic jacks. The leading edge (or cutting shoe) of the caisson is sloped out at a sharp angle to aid sinking in a vertical manner; it is usually made of steel. The shoe is generally wider than the caisson to reduce friction, and the leading edge may be supplied with pressurised bentonite slurry, which swells in water, stabilizing settlement by filling depressions and voids. An open caisson may fill with water during sinking. The material is excavated by clamshell excavator bucket on crane. 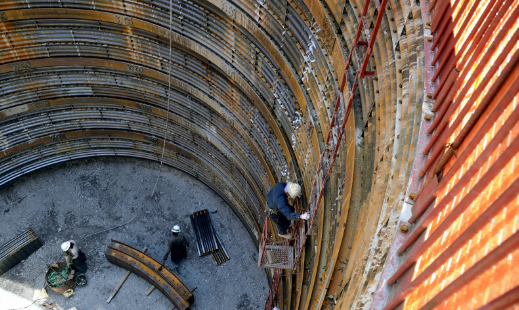 The formation level subsoil may still not be suitable for excavation or bearing capacity. The water in the caisson (due to a high water table) balances the upthrust forces of the soft soils underneath. If dewatered, the base may "pipe" or "boil” causing the caisson to sink. To combat this problem, piles may be driven from the surface to act as:

H-beam sections (typical column sections, due to resistance to bending in all axis) may be driven at angles "raked" to rock or other firmer soils; the H-beams are left extended above the base. A reinforced concrete plug may be placed under the water, a process known as Tremie concrete placement. When the caisson is dewatered, this plug acts as a pile cap, resisting the upward forces of the subsoil.

It is simply know as Monolith. It is larger than the other types of Caissons. It is constructed in the quay walls where resistance to impact from ship is needed. A quay wall is an earth retaining structure which is used to dock floating vessels and transfer goods. Quay walls are of various types and are used for mooring and berthing floating vessels such are barges, container vessels, ships, boats etc. 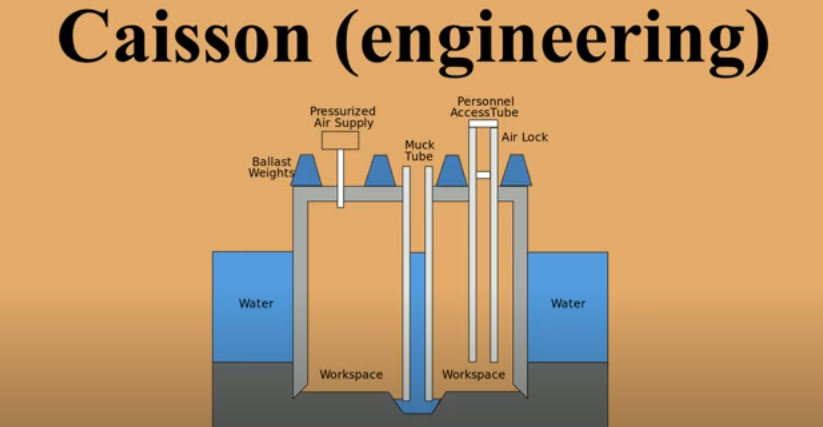 Pneumatic Caissons are bottomless boxes sealed at the top. These boxes are filled with pressurized air. These are placed in the water like an inverted glass, thus, pushing the water and mud out of the box. Unlike Shallow caissons which are open to the air, pneumatic caissons (sometimes called pressurized caissons), which penetrate soft mud, are bottomless boxes sealed at the top and filled with compressed air to keep water and mud out at depth. An airlock allows access to the chamber. Sandhogs (workers) move mud and rock debris (called muck) from the edge of the workspace to a water-filled pit, connected by a tube (called the muck tube) to the surface. A crane at the surface removes the soil with a clamshell bucket. The water pressure in the tube balances the air pressure, with excess air escaping up the muck tube. The pressurized air flow must be constant to ensure regular air changes for the workers and prevent excessive inflow of mud or water at the base of the caisson. When the caisson hits bedrock, the sandhogs exit through the airlock and fill the box with concrete, forming a solid foundation pier.

A pneumatic (compressed-air) caisson has the advantage of providing dry working conditions, which is better for placing concrete. It is also well suited for foundations for which other methods might cause settlement of adjacent structures.

Construction workers who leave the pressurized environment of the caisson must decompress at a rate that allows symptom-free release of inert gases dissolved in the body tissues if they are to avoid decompression sickness, a condition first identified in caisson workers, and originally named "caisson disease" in recognition of the occupational hazard. Construction of the Brooklyn Bridge, which was built with the help of pressurised caissons, resulted in numerous workers being either killed or permanently injured by caisson disease during its construction. Barotrauma of the ears, sinus cavities and lungs and dysbaric osteonecrosis are other risks.

Caissons are used in engineering field due to the following benefits: