A staircase is a structural element that is used for travelling to a higher height or it is used to travel from one storey of a building to another. It is designed to cover a large vertical distance by cleaving up into smaller vertical distances which are called steps. The steps may be stationary or may be moving continuously that facilitates the reaching of heights without climbing. Thus, staircases are the connecting links between two or more floors in a building. It is made up of concrete of grades starting from M20 and reinforcements of grades starting from Fe 415.

A staircase has several components. They are 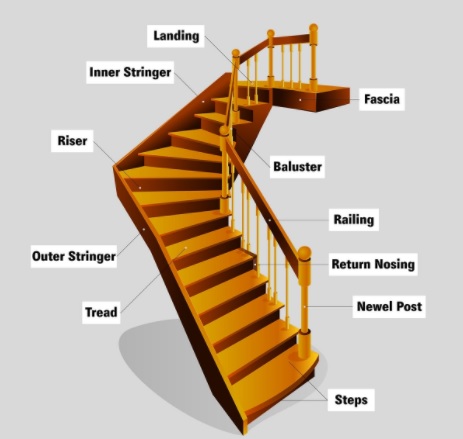 Fig 1: Components of a staircase

Rise - It is a surface that forms the face of the step. It is measured from the top of one tread to the top of the next tread. For calculation purposes, the risers are used to ascertain how many steps would accommodate a particular vertical distance. For ages, carpenters have estimated that tread width times the riser height should be between 72 to 75 inches. In the case of the main stair, the maximum measurement of rise should not be more than 8 1/4 inches. For domestic purposes, its maximum dimension is 9 inches.

Tread - It is a part of the staircase where a person steps foot. Whenever a person has to enter a staircase the first thing he does is step foot on tread and so it may be regarded as starting point of staircase for the user. For calculations, the length of tread that is present above the last riser is not included in measurements when total run of the staircase is to be measured. Similarly, the total run is not simply the sum of tread length when nosing is present, since there is an overhang that is caused by the nosing which must be deducted from the total run. For a multi-storey building, each flight of stairs should be calculated separately but the measurements of rise and tread have to be the same always, even if the number of treads is dissimilar. As per Building code, the minimum length of the tread should be 10 inches.

Baluster - These are the vertical members that are present between handrails and tread (channel in case of cut string). They may be simple and plain or they may be decorative, it is as per the choice of the owner of the house or building, or the interior designer appointed. Another name for baluster is guards or spirals. Usually a tread requires two balusters. When two consecutive balusters are put on a tread then the height of the second baluster should be higher than the first baluster and is closer to the riser. The extra height in the second baluster is generally present at the mid point between decorative elements on the baluster. In this way, the bottom decorative elements are oriented with the tread and the top elements are oriented with the railing angle.

Hand rail - It is a form of protection designed to prevent objects and people from falling into an open stairwell. It rests on top of a series of balusters forming an upper edge of the staircase. As per Building codes, handrails must be between 34 inches to 38 inches high when measured from the top of the treads, having a diameter between 1.25 inches to 2.675 inches.

Stringer - It is the inclined board on which risers and treads are present. There are three stringers in a staircase: one on each side, and one in the middle. They are not always visible, but can be seen in case of stairs having open sides. They can be moulded into the shape of each step, or they can be kept uncut and conceal the edges of the treads.

Nosing - It is a visible projection at the edge of a tread that hangs over the riser below. Usually nosings are not provided much, but when they are provided then they are included in the length of the tread. As per Building codes, the nosing should have a minimum length of 0.75 inches and a maximum length of 1.25 inches.

Newel -  It is a large vertical component that may be plain or decorative and  is located on either end of the baluster, or at each bend.

The Newel Cap – It is a decorative, carved shaped or turned, that is present on top of the newel post.

Landing - It is a wide spaced flat surface that is present between intervals of flights of stairs within a staircase. It is used for changing the direction of the stairs. It is also used for resting purposes in case the vertical distance to be covered by the userl is large. It is recommended that a landing should be provided after every 15 steps and its minimum measurement should be the same as 3 treads combined.

In case of design, a minimum measurement of each component should be taken as per the Building codes so as to avoid any kind of structural failure. Also, higher grade concrete and steel may be used for making the staircase strong. As for the design, it is completely up to the user as to what design will fit the criteria of that person for the house or building. Apart from this, the calculations should be accurate for the perfect accommodation of all the components of a staircase. It is also important to keep in mind the structural failure in case any natural calamity arises. Hence a staircase should be built as per proper Building code to avoid any kind of haphazardness.