Experience and observations of failures of embankments constructed over relatively deep deposits of soft soils have shown that when failure occurs, the embankment sinks down, the adjacent ground rises and the failure surface follows a circular arc as illustrated in Figure below.

At failure the driving and resistance forces act as follows:

The factor of safety against slope instability is equal to the ratio of the resisting moment to
driving moment.

Failure takes place when the factor of safety is less than 1, i.e., the driving moment > resisting moment.

Simple Rule of Thumb for Factor of Safety:

A rule of thumb based on simplified bearing capacity theory can be used to make a preliminary "guestimate" of the factor of safety (FS) against circular arc failure for an embankment built on a clay foundation without presence of free water. The rule of thumb is as follows:

Since the rule of thumb assumes that there is no influence from groundwater, c and γFill are effective stress parameters.

The factor of safety computed by using this rule of thumb should never be used for final design. This simple equation obviously does not take into account such factors as fill strength or fill slope angle and does not identify the location of a critical failure surface. If the factor of safety computed by using the rule of thumb is less than 2.5, a more sophisticated stability analysis is required.

However, this rule of thumb can be helpful very early in the design stage to make a quick preliminary check on whether stability may be a problem and if more detailed analyses should be conducted. It can also be of use in the field while borings and sampling are being performed. For example, if in-situ vane shear tests are being carried out as part of the field investigation for a proposed embankment, the geotechnical specialist can use the vane strength with the equation above to estimate the FS in the field. This estimate can aid in directing the drilling, sampling, and testing program while the drill crew is at the site and help insure that critical strata are adequately explored and sampled. Finally, the FS calculated by the rule of thumb can be used to check for gross errors in computer output or input.

There are several available methods that can be used to perform a circular arc stability analysis for an approach embankment over soft ground. The simplest basic method is known as the Normal or Ordinary Method of Slices, also known as Fellenius’ method or the Swedish circle method of analysis. The Ordinary Method of Slices can easily be performed by hand calculations and is also a method by which the computation of driving and resisting forces is straightforward and easily demonstrated. For this method, the failure surface is assumed to be the arc of a circle as shown in Figure 6-7 and the factor of safety against sliding along the failure surface is defined as the ratio of the moment of the total available resisting forces on the trial failure surface to the net moment of the driving forces due to the embankment weight, that is: 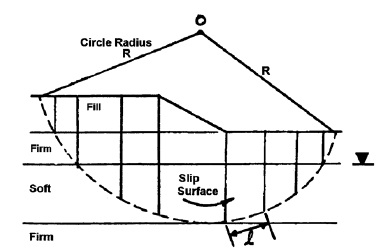 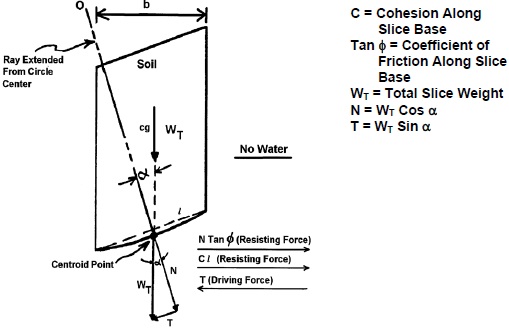 The case with the presence of water is shown in Figure below.

The following assumptions are then made in the analysis using Ordinary Method of Slices:

1- The available shear strength of the soil can be adequately described by the Mohr-Coulomb equation:

2- The factor of safety is the same for all slices.

3- The factors of safety with respect to cohesion (c) and friction (tan φ) are equal.

4- Shear and normal forces on the sides of each slice are ignored.

5- The water pressure (u) is taken into account by reducing the total weight of the slice by the water uplift force acting at the base of the slice.

The equation above is expressed in terms of total strength parameters. The equation could easily have been expressed in terms of effective strength parameters. Therefore, the convention to be used in the stability analysis, be it total stress or effective stress, should be chosen and specified. In soil problems involving water, the engineer may compute the normal and tangential forces by using either total soil weights and boundary water forces (both buoyancy and unbalanced hydrostatic forces) or submerged (buoyant) soil weights and unbalanced hydrostatic forces. The results are the same. When total weight and boundary water forces are used, the equilibrium of the entire block is considered. When submerged weights and hydrostatic forces are used, the equilibrium of the mineral skeleton is considered. The total weight notation is used herein as this method is the simplest to compute.

To compute the factor of safety for an embankment by using the Ordinary Method of Slices, the step-by-step computational procedure is as follows:

Step 1- Draw a cross-section of the embankment and foundation soil profile on a scale of either 1-inch = 10 feet or 1-inch = 20 feet scale both horizontal and vertical.

To simplify computation, locate the vertical sides of the slices so that the bottom of any one slice is located entirely in a single soil layer or at the intersection of the ground water level and the circle.

Locate the top boundaries of vertical slices at breaks in the slope. The slice widths do not have to be equal. For convenience assume a one-foot (0.3 m) thick section of embankment. This unit width simplifies computation of driving and resisting forces.

Also, as shown in figures above the driving and resisting forces of each slice act at the intersection of a vertical line drawn from the center of gravity of the slice to the failure circle to establish a centroid point on the circle. Lines (called rays) are then drawn from the center of the circle to the centroid point on the circular arc. The α angles are then measured from the vertical to each ray.

When the water table is sloping, use Equation 6-16 to calculate the water pressure on the base of the slice:

where: αw = slope of water table from horizontal in degrees.
hw = depth from ground water surface to the centroid point on the circle.

Step 4- Compute the total weight (WT) of each slice.

For illustration, the resisting and driving forces acting on individual slices with and without water pressure are shown on Figures above.

To compute WT, use total soil unit weight, γt, both above and below the water table.

Step 5- Compute frictional resisting force for each slice depending on location of ground water table.

T is the component of total weight of the slice, WT, acting tangent to the slice base.
T is the driving force due to the weight of both soil and water in the slice.

Step 8- Sum resisting forces and driving forces for all slices and compute factor of safety.

Note: Methods recommended represent minimum requirement. More rigorous methods such as Spencer’s method should be used when a computer program has such capabilities.

For side slopes of routine highway embankments, a minimum design safety factor of 1.25 as determined by the Ordinary Method of Slices is used. For slopes that would cause greater damage upon failure, such as end slopes beneath bridge abutments, major retaining structures, and major roadways such as regional routes, interstates, etc., the design safety factor should be increased to at least 1.30 to 1.50. For cut slopes in fine-grained soils, which can lose shear strength with time, a design safety factor of 1.50 is desirable.