A slope that extends for a relatively long distance and has a consistent subsurface profile may be analyzed as an infinite slope. The failure plane for this case is parallel to the surface of the slope and the limit equilibrium method can be applied readily.

A typical section or “slice” through the potential failure zone of a slope in a dry cohesionless soil, e.g., dry sand, is shown in Figure 6-3, along with its free body diagram. The weight of the slice of width b and height h having a unit dimension into the page is given by:

where γ is the effective unit weight of the dry soil. For a slope with angle β as shown in Figure below: 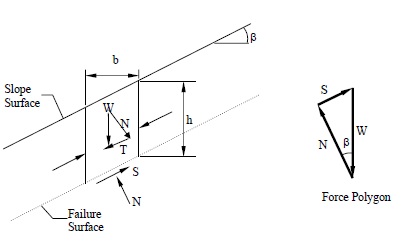 The normal (N) and tangential (T) force components of W are determined as follows:

The available shear strength along the failure plane is given by:

The factor of safety (FS) is defined as the ratio of available shear strength to strength required to maintain stability. Thus, the FS will be given by:

If a saturated slope in a c-φ soil has seepage parallel to the surface of the slope as shown in Figure below, the same limit equilibrium concepts may be applied to determine the FS, which will now depend on the effective normal force (N'). In the following analysis, effective shear strength parameters, c' and φ' are used. 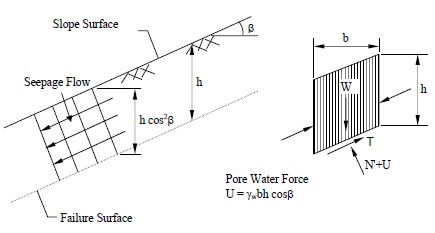 From Figure above, the pore water force acting on the base of a typical slice having a unit dimension into the page is:

where h is any depth less than or equal to the depth of saturation and b is a unit width.

The available frictional strength, S, along the failure plane will depend on φ' and the effective normal force, N' =N-U, where N is the total normal force. The equation for S is:

The factor of safety for this case will be:

By substituting W = γsat b h into the above expression and rearranging terms, the FS is given by:

For c' = 0, the above expression may be simplified to:

From Equation above it is apparent that for a cohesionless material with parallel seepage, the FS is also independent of the slope depth, h, just as it is for a dry cohesionless material as given earlier. The difference is that the FS for the dry material is reduced by the factor γ'/γsat for saturated cohesionless materials to account for the effect of seepage. For typical soils, this reduction will be about 50 percent in comparison to dry slopes.

The above analysis can be generalized if the seepage line is assumed to be located at a normalized height, m, above the failure surface where m =z/h. In this case, the FS is:

and γsat and γm are the saturated and moist unit weights of the soil below and above the seepage line. The above equation may be readily reformulated to determine the critical depth of the failure surface in a c'-φ' soil for any seepage condition.