Design shear stresses generally act along planes perpendicular to the longitudinal axis of a member. These stresses, either alone or in combination with normal stresses, create principal tensile stresses that can lead to sudden failure. ACI design criteria alleviate the risk of such failures by applying more conservative theories and resistance factors than are used for more ductile modes of failure.

In the following sections, the ACI 318 shear provisions are summarized and illustrated for some of the more commonly encountered design cases.

The basic strength requirement for shear design is

The following step-by-step guide summarizes the ACI 318 shear design provisions that apply to the most commonly encountered case, in which the slender reinforced concrete beam is subject to the following restrictions.

What is the step-by-step procedure for shear design of concrete members?

There are many situations in which shear force is transferred from one concrete element to another or between a concrete element and another material. A model has been developed that has been shown to correlate with the nominal strength of this force transfer. This model is analogous to static friction with a normal force provided by properly developed reinforcement that crosses the shear plane, modified by an appropriate coefficient of static friction, μ.

ACI Sec. 11.6.4 defines the coefficient of friction as follows:

When shear friction reinforcement with an area of Avf crosses the shear plane at right angles, which is the usual case, the nominal shear strength is

fy, the yield strength of reinforcement, is limited to a maximum of 60,000 psi. Ac is the area of the concrete section resisting shear. ACI 318 also gives a more general expression for shear transfer when tensile shear friction reinforcement crosses the shear plane at an acute angle.

A bracket or corbel is a reinforced concrete element that projects from a wall or column and supports a reaction from another element. In most cases, the reaction is primarily a vertical force whose resultant acts at a short distance av from the face of the supporting wall or column, as shown in the figure below. Unless special provisions are made to alleviate horizontal forces (for example, by using very low friction-bearing pads or roller supports), there will also be a horizontal tensile force, Nuc, transmitted into the support. ACI Sec. 11.8.3 requires that the horizontal force be treated as a live load with a magnitude of at least 20% of the vertical force, Vu. For most practical cases, when the ratio av/d is less than 1, the prescriptive procedure in Sec. 11.8 of ACI 318 is used to design the bracket or corbel. 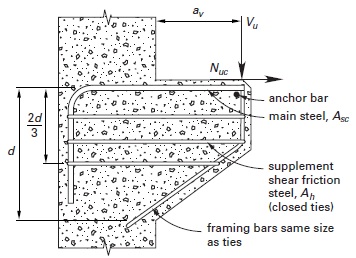 What is the step-by-step prescriptive design provisions in ACI 318 for a bracket or corbel?

2- Check if it is normal weight concrete

Most reinforced concrete members are loaded either axially or transversely in such a manner that twisting of the cross section is negligible. ACI Sec. 11.5 sets threshold limits for torsional moments beyond which their effects must be included in designs. From ACI Sec. 11.5.1, for nonprestressed members, the threshold limit is

If the applied factored torsional moment exceeds the threshold, the member must be reinforced with additional transverse ties and longitudinal steel to resist the torsional moment. ACI 318 considers two cases: equilibrium torsion and compatibility torsion.

Equilibrium torsion applies to situations where redistribution of loads cannot occur and the torsional resistance is necessary to maintain equilibrium. A common example is a precast concrete spandrel beam. Compatibility torsion describes a situation in which loads can redistribute after torsional cracking. In such a case, a reduction is permitted in the design value of torsional moment. In the case of compatibility torsion, ACI Sec. 11.5.2 allows the maximum torsional moment that the member must be designed to carry to be limited to four times the threshold value.

For the precast beam, full torsional resistance is needed to maintain equilibrium and this member must be designed for equilibrium torsion. In contrast, for the cast-in-place spandrel, a reduction in torsional resistance reduces the negative bending moment transferred from the slab with a corresponding redistribution of moment to the positive region of the slab. This is a case of compatibility torsion.

s is the spacing, Av is the area of outer stirrup legs resisting shear, and At is the required area of one outer leg to resist torsion. The space truss analogy also requires longitudinal steel, Al, that is generally additive to any other longitudinal steel required to resist axial forces or bending. ACI Sec. 11.5.6.2 requires that the longitudinal torsional steel must be distributed around the perimeter resisting torsion at a spacing of no more than 2 in. The design procedure for both transverse and longitudinal reinforcement for members with torsional moment, Tu, exceeding the threshold is summarized below:

What is step-by-step design prodecure for both transverse and longitudinal reinforcement for members with torsional moment, Tu, exceeding the threshold of Sec 11.5.1?

2-1- if No â–º compression struts control; STOP and redesign section