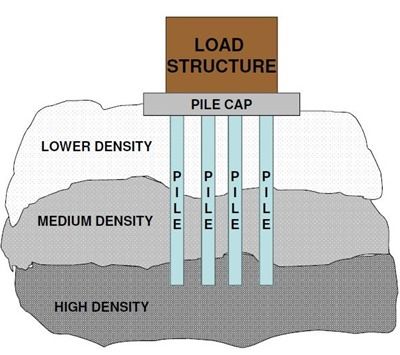 A deep foundation is a type of foundation which transfers building loads to the earth farther down from the surface than a shallow foundation does, to a subsurface layer or a range of depths.

A pile is typically a vertical structural element of a deep foundation, driven or drilled deep into the ground at the building site.

Ultimate bearing capacity of piles is the sum of its skin resistance and tip resistance:

For the methods shown, with the exception of Brinch Hansen’s method and Kulhawy et al. (1983), the capacity resulting from the frictional term (Ngamma term) is assumed to be negligible in comparison to capacity resulting from the cohesional (Nc) and surcharge/embedment terms (Nq terms). However, this assumption is not always valid, especially for short, large diameter piles such as drilled shafts. If you want to include the frictional term, it is recommended that you use Brinch Hansen's method:

Alternately you could use Kulhawy et al. (1983) as discussed later. For PHI = 0 analyses, this frictional term is zero.

Brinch Hansen's method, as described in shallow foundations, is applicable to both shallow and deep foundations.

where e = base of the natural logarithm; and 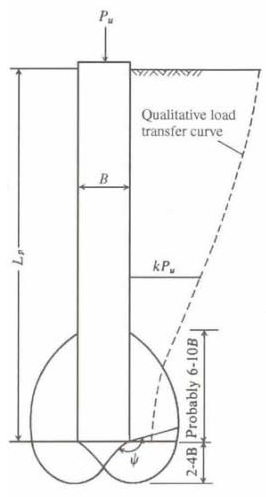 "Psi" must be estimated using judgment. Janbu (1976) indicated that "Psi" varies from about 60° for soft soils to about 105° for dense soils

It should also be pointed out that Janbu derived this equation for plane-strain conditions so that it would be appropriate to multiply the calculated value of qtip,ult by an appropriate shape factor. Bowles (1996) indicates that a shape factor of 1.3 may be used, but other shape factors (e.g. Brinch Hansen, Meyerhof, etc.) could be used. Judgment must be exercised when selecting a shape factor to apply to Janbu’s equation, especially if the strength parameters for the soil include c in addition to PHI.

2- Typical values of Ir for sand and silt are as follows:

3- Estimate E, v, and evol. Some typical ways are as follows:

where PA = atmospheric pressure; and

Direct Estimates from In Situ Tests:

CPT: The following information is from Kulhawy et al. (1983, pp. 8-22 to 8-23). CPT results should be reasonably reliable because the cone is basically a small diameter deep foundation. The correlations have shown, for tip resistance:

The lower range of qc values measured in the field should be used in this equation.

SPT: SPT blowcounts have also been used frequently. However, the test procedure does not replicate the actual loading of a deep foundation. Still, a useful correlation for the tip resistance of driven piles is: