Immediate settlement results from distortion of soil mass caused by a change in total stress. For general definitions, remarks and types of settlement refer to Settlement types, definitions, and general equation article.

The settlement of the corner of a rectangular base of dimensions B' x L' on the surface of an elastic half-space can be computed from an equation from Theory of Elasticity as follows:

q0 = intensity of contact pressure in units of Es

I1 and I2 = influence factors, which depend on L'/B', thickness of stratum H. Poisson's ratio, and base embedment depth D

Influence factors can be computed using: 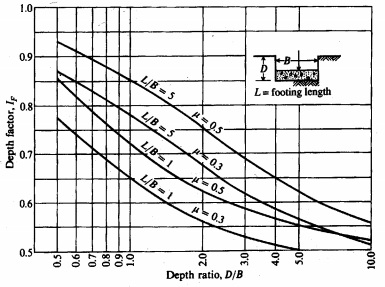