Grouting: Things a Civil Engineering must know about grouting

Articles > Grouting: Things a Civil Engineering must know about grouting

Grouting is a form of ground improvement technique, which includes injection of a mixture of water,cement and sand, injected with high pressure in the ground. Grouting can sometimes also be treated as reinforcement. The modern form of  grouting was first introduced in mining works for arresting seepage and strengthening. Grouting is majorly used in case foundation purposes for strengthening, controlling settlement, and increasing the bearing capacity of the soil, etc.

In order to obtain the desired effect a grout should not set quickly because this may affect the pumping, but should set and harden after the completion of the pumping. The viscosity and subsequent rate of hardening are regulated during pumping by addition of additives, because the viscosity gradually changes with time to time when the grout transforms from liquid to solid state. The following principles are to be followed while selecting a grout:

Similar types of grouting plants are used for both solution and suspension type of grout, they only differ in storage and mixing. A grouting plant includes a mixer, an agitator, a pump, and piping connected to the grout holes. The items required for a grouting plant with their functions are: 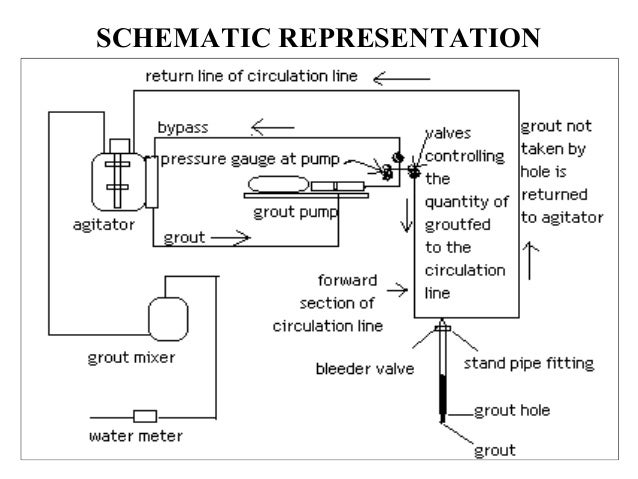 When mixing the grout certain precautions are to be followed which were given by Houlsby, they are as follows:

Grouting materials are grouped into two different types as follows:

Groutability is the ease with which the grout can be injected into the ground. In order to obtain satisfactory performance, the grain distribution of the grout particles must be known because it shows the relationship between the suspended particles and the void dimensions. Factors which decide the effect of rate of injection of grout are:

When grout particularly Suspension grout is injected into the soil, the relationship between grout particles and the void ratio of the soil is very important. So a ratio is considered which has to be greater than 20 for the grout to be injected properly, this ratio is known as the Groutability ratio which was defined by Kravetz.

Compaction Grouting: In this form of grouting a thick viscous paste of low mobility is injected into the soil, upon reaching the ground it forms a bulb shape and compresses the surrounding soil.

Displacement Grouting: In this form of grouting, both low and high viscous paste can be injected into the soil. Here the grout displaces the surrounding soil,thus compacting the soil. It is further subdivided into

Grouting though is not a new concept in the field of civil engineering, but with time its advancement and uses are enhancing. Grouting is used in repair works where there are cracks in concrete walls or below the foundation, hence with proper use grouting, a structure can be saved from collapsing as well as it also helps for strengthening the soil and enhances the characteristics of the soil upon which the foundation has to stand. Therefore, with the help of grouting many challenging situations can be solved in case of civil related works.