Material Behavior of Continuum Soil : Everything you need to know

Articles > Material Behavior of Continuum Soil : Everything you need to know

In this case, the soil material loading and unloading follow the same path. No strain energy is stored in the body when completely unloaded ie. strain is fully recoverable. Elastic behavior follows Hook’s Law, which states that in elastic range stress is directly proportional to strain. Therefore, when soil exhibits elastic behavior stress will directly be proportional to strain.

Now, the stress-strain curve can be either Linear or Nonlinear

In this case, the soil when loaded and unloaded again does not follow the same path. An amount of Strain energy is stored in the body which does not allow the soil to regain its actual shape and thus the strain energy is not fully recoverable. Plastic behavior of soil is very rarely seen in practical fields because up to particular stress the soil will behave elastically and have the tendency to dissipate all the strain energy upon unloading, but beyond particular stress, the soil particles can no longer exhibit elastic tendency and get deformed permanently.

This is a combination of both elastic and plastic behavior that the soil exhibits upon loading. In this case, we have two types of strain

In soil behavior, we have another type of behavior that is time-dependent but not instantaneous. This behavior which is a function of time is viscous behavior. This is basically observed in the case of mud sliding because it acts like a viscous fluid and the failure or any change is very slow and is a function of time. The stress-strain curve will show an elastic form of deformation ie. it will either be linear or nonlinear.

Another case of visco-elastic behavior can be seen during the excavation of tunnels. While excavating tunnels the time lag between excavation and the time of installation of support(support in form of grouting, steel joints, etc.) the viscoelastic behavior of soil plays an important role because this behavior will decide the time up to which the excavated tunnel can stand without any support and the supports are to be installed within that limited time or else the excavated tunnel will fail. Therefore, in this case, the deformation of soil is not instantaneous and it takes some time to deform.

In this case, a viscous soil shows similar behavior in the stress-strain curve as that of elastoplastic ie. up to certain stress it behaves like an elastic material but beyond that stress, it behaves like plastic with complete deformation. But since the soil is viscous this deformation will not be instantaneous instead it will be slow and time-dependent.

Apart from the above-mentioned behavior, soil can exhibit some other types of behavior like- 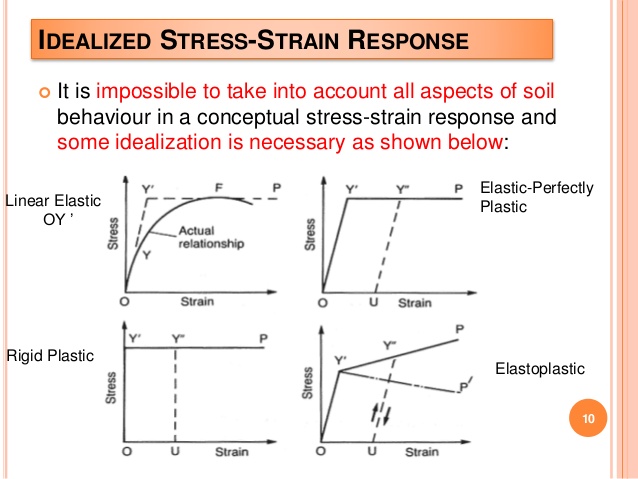 In order to solve the problem of different behavior of soil, we can represent it in terms of a physical model which is similar to a mass(m) attached to an elastic spring having constant (k). Any model that represents a material behavior is known as a Rheological model.

From the above discussion, we can predict the different varieties of deformations a soil mass can exhibit in practical life, and hence to have a piece of proper knowledge about the stability of the soil and other parameters one must study the stress-strain graph and the behavior of the soil material properly. When have different rheological models for different situations and each different situation has to be studied separately. The same soil can show two or more types of behavior at different segments hence all the segments of a soil mass has to be studied differently.