Eiffel Tower, the symbol of Paris

It is a landmark of Paris, France. The tower is made of wrought iron. The name of the tower is given with respect to the engineer Gustave Eiffel, whose company designed and built the tower. It was constructed in the year 1887. It took 2 years to build the structure. At first, the purpose of the tower was to serve as an entrance to the World’s fair of 1889. Initially, it was criticized by people for its design but after a few years, it has become the global icon of France and the most-visited paid monuments all over the World.

The height of the tower is 324 m. It is equivalent to an 81 storied building. It is the tallest structure in Paris. The base of the tower is square. The distance between the two sides is 125 meters. Eiffel Tower was the first structure to reach a height of 300 meters. The top of the tower is used for aerial broadcasting. After the addition of this service, the structure is taller than the Chrysler Building by 5.2 meters.

There are three levels for the visitors to the Eiffel Tower. The first and second level has restaurants. The first level is at a height of 57 meters from the ground which has a capacity to lift 3000 people together. Around the first level, there is a transparent glass-covered floor for walking. On the first floor, one can discover the structure of the tower, the beams, and all the elevator cabins with historic outdoor looks. The visitors have the chance to know more and recalling the history of the legendary monument. 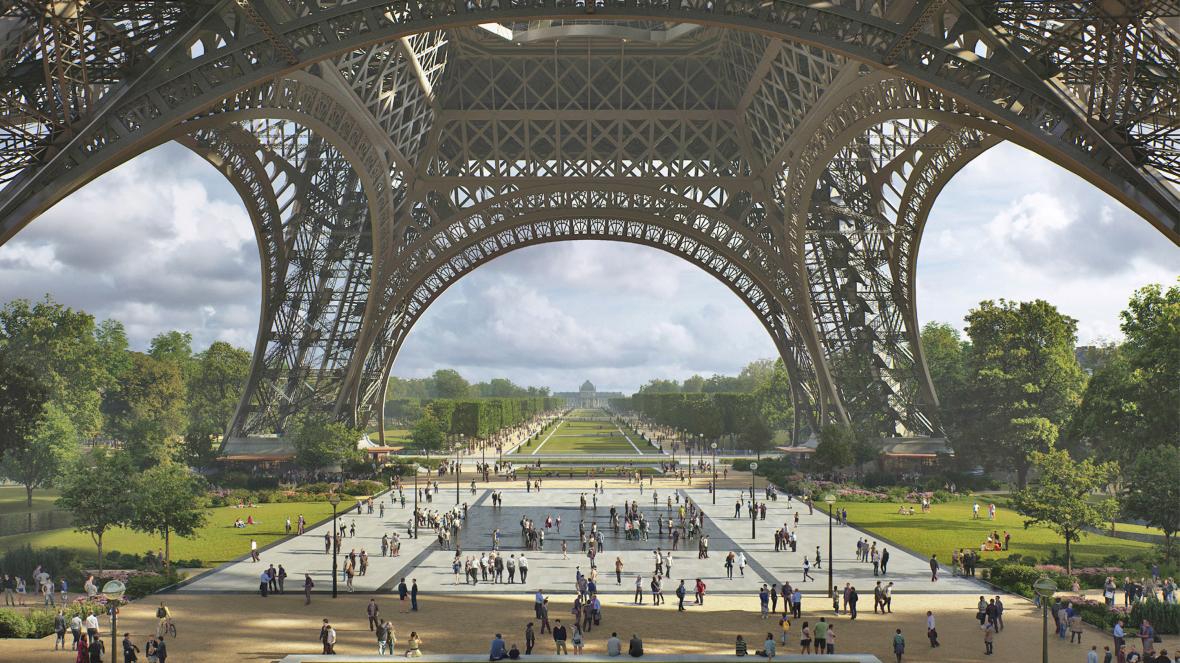 Fig 2: Base of the Eiffel Tower

The second floor of the tower is at a height of 115 meters from the ground. It has a capacity of lifting 1600 people at a time. On this floor, galleries are there to go around the floor. This floor is considered a magnificent viewpoint for Paris city. One can have a splendid and spectacular view of Paris from this point. Numerous monuments and landmarks such as the Arc de Triomphe, the Sacre-Coeur, and the Montparnasse Tower can be seen from the 2nd floor with a closer view through telescope. On a sunny day, we can have a lookup to 70 kilometers.

Fig 3: Observation Deck of the tower

The third and final floor of the tower is at an elevation of 276 meters from the ground. Telescopes are also available here to see the beauty of Paris. This floor is only accessible by lift. From high up, there are technical installations for radio and tele-diffusion.

When we enter the pavilion, on the right side of its walls are there. They carry different information. It can be recognized easily because it is black, and filled with photos, images, drawings, and various texts. In the center of the wall, in reach of man, there is a television screen which displays Gustave Eiffel’s book ‘The Tower of 300 m’. He wrote the book after 11 years of the construction of the tower after the 1900 World’s Fair. He described in the book absolutely everything about the monument, the reason for its construction, the obstacles they encountered during the construction, cost of each part, choices of materials, etc. 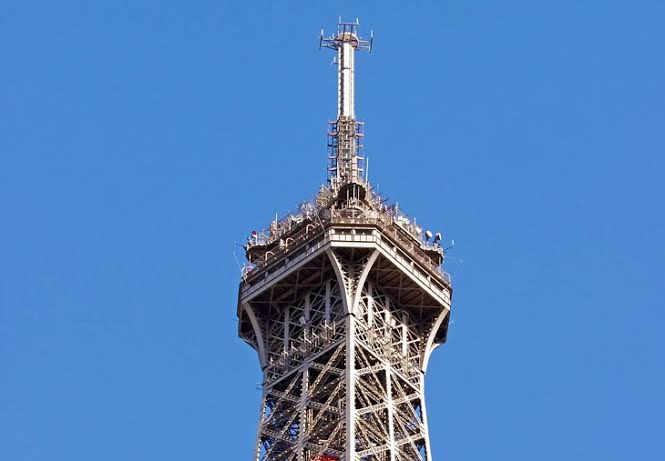 Construction of the tower

The tower is built of pure structural wrought iron. It makes the structure relatively extremely light. The construction of the tower marked a great architectural achievement. Total 18038 pieces of iron were fitted together by 2.5 million rivets. Around 300 workers completed the construction of the tower in just 2 years, 2 months, and 5 days. The construction was started on July 28, 1887. The four foundations were started at the same time. According to Gustave Eiffel’s calculations, it showed that the pressure on each floor of his tower would not exceed that of a building and told the residents not to fear possible hazards. The foundations were built over heavy blocks of concrete which were designed to carry the load of 4 masonry bases which themselves receive the load of the heavy metal structure. The foundations contain various rooms on the pedestals like the warden’s room, technical rooms of the elevators, etc. The pillars were constructed over the pedestals. At the starting point of pillars, there was a problem of inclination. The pillars should meet the first level at the same altitude. There was a fear of having an unacceptable gap at the finishing time due to tiny deviations at starting. The problem was overcome by installing hydraulic cylinders at the feet of pedestals and usage wooden scaffolding. All the floors were assembled in the same way as the first floor. Only height was in addition. To mount the rooms on the first floor, the hoist was used. The second-floor construction used a different method because the railway lifts stopped there. Those were two hanging lifts that used to mount the visitors to the top. It required an additional support frame on the pillar to take external load by the crane. The construction of stairs and elevators was made by a wooden staircase established along the beams of elevators. From the first-floor, spiral staircases were installed. 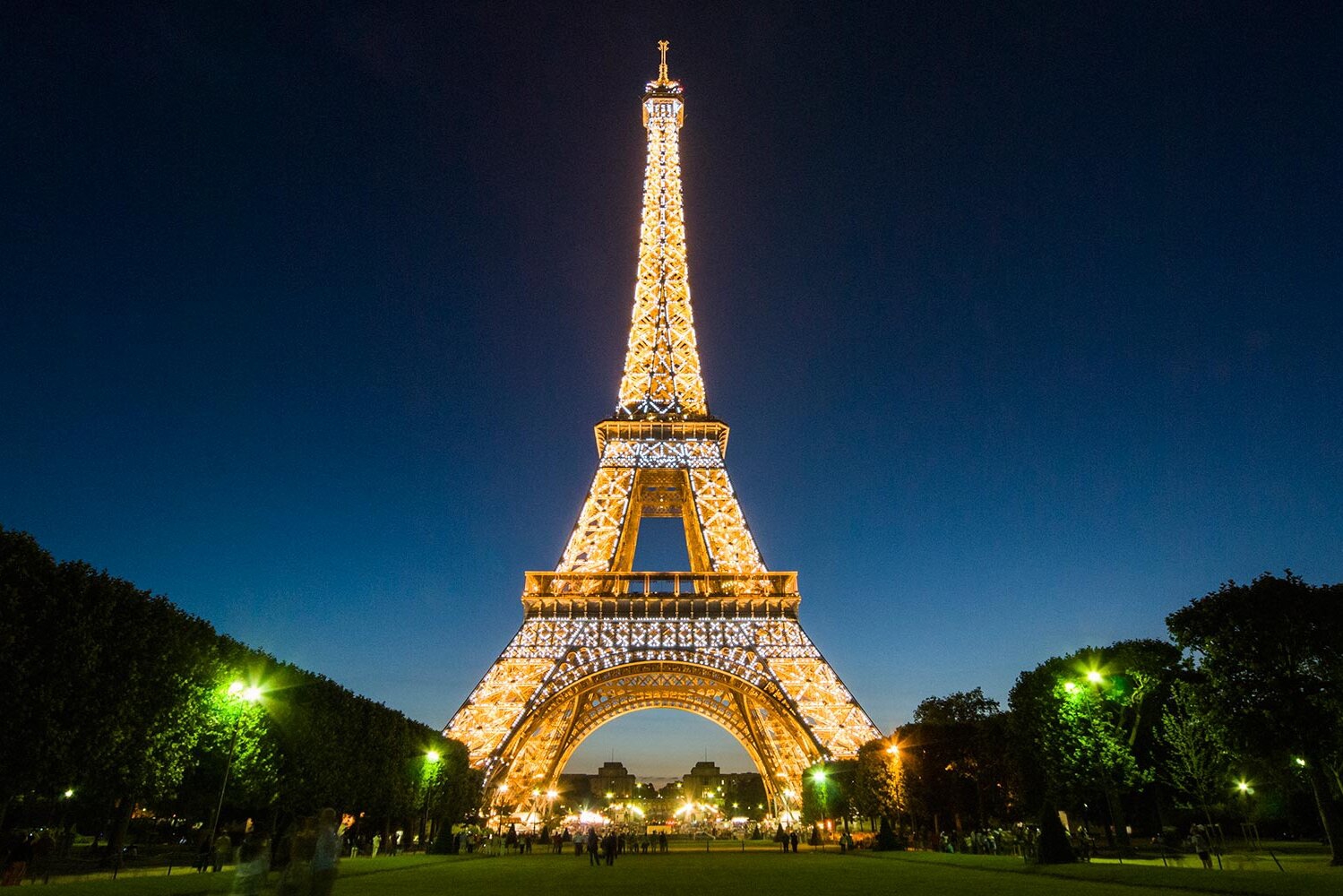 Fig 5: A night view of the tower

Some interesting facts about the Eiffel Tower