Theodolite, its types and essential parts

Theodolite is a very commonly used instrument that has a fundamental importance in the field of surveying and structural engineering. A theodolite is used to measure all sorts of vertical and horizontal angles. The work of land survey is almost impossible without the use of a theodolite. Apart from the work of land surveying, theodolites are widely being used in locating points on the line, differentiating the levels, prolonging survey lines, etc. Their use in the construction of buildings and infrastructures, meteorology, and rocket launching is growing very rapidly.

Uses of a Theodolite:

There are many types of theodolites, which may be classified into two groups:

The line of the sight in a transit theodolite can be reversed if the telescope is reversed through 180° in a vertical plane.

They are also known as Y-theodolites and plane theodolites. In such types of theodolites, the reversal of sight line and telescope is not possible.

It is the most commonly used theodolite, in which the principles of a Vernier Caliper are utilized while taking out observations. The precision values of this type of instrument vary in the order of 10" to 20".

This is a modern electronic instrument. All the parameters can be obtained which are required to be observed in the survey procedure. The viewing panel of the instrument displays the observation values. The precision of this type of instrument ranges in the order of 0.1" to 10".

There are several types of theodolites based on their distinctive specifications and function. Each type has a different mode of operation. However, some fundamental functions are common in all types of theodolites inherently. In this article, we will discuss the parts of a Vernier Theodolite, because it is the most common type of theodolite, widely used in all sorts of surveying all over the world. The salient parts of a vernier theodolite are as follow: 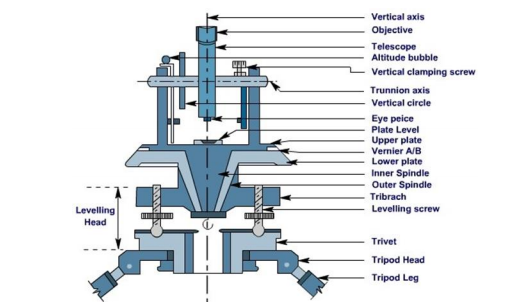 The top leveling Head of a theodolite is its lowermost part, which consists of two parallel and horizontal panels that are separated by screws. These screws are known as the traveling screws. In the lower plate, there is a large thread-hole in the center. This thread hole is called trivel or foot-plate. It enables the instrument to be installed on the tripod stand and get it screwed. The central aperture of trivel gives a way for hanging a plumb bob. There is a tribrach in the form of a plate in the upper part of the head. There is a tapered-bearing at the center of the tribrach. It has three arms. Each carries a leveling screw. It gives support to the upper portion of the instrument. The main objective of the leveling head is to provide a balanced level to the instrument.

The lower plate is a horizontal circular plate monolithically constructed with an outer spindle. A scale is engraved at its beveled edge with divisions in degrees and minutes increasing in a clockwise direction. It provides the main scale reading of a horizontal angle and a means to fix or unfix the whole of the instrument.

It is a horizontal circular plate monolithically constructed with the inner spindle. It is fitted with two diametrically opposite vernier scales designated as A and B. Functions of upper plates are to support a pair of magnifiers for the verniers, a pair of plate levels, a pair of support frames for the telescope, and a means to fix or unfix the upper plate of the instrument with its lower plate.

Two standards resembling the letter A are attached on the upper plate. This provides the bearings of the pivots of the telescope allowing it to rotate on its trunnion axis in the vertical plane. The vernier frame and arm of vertical circle clamp are also attached to it.

Also called T-frame or index frame, consists of a vertical leg known as clipping arm and a horizontal bar called the index arm engraved with verniers C and D at its ends. Each of the verniers at C and D are having two scales that increase in opposite directions. It is used as a seat for altitude bubble and also provides vernier reading for vertical angle measurement

The telescope of a theodolite is identical in structure and uses, as in the case of a dumpy level. But, in theodolite, the telescope is mounted on a horizontal spindle called the horizontal axis or the trunnion axis to rotate it also in the vertical plane.

A sensitive level tube placed on the vernier frame is called an altitude bubble. It is used to make the horizontal axis truly horizontal.

A theodolite instrument has number of screws as its component parts. These are classified into different types depending on their functions.