Leaning Tower of Pisa, the Beauty of Imperfection

Articles > Leaning Tower of Pisa, the Beauty of Imperfection

This building is situated in Pisa, Italy.it is also known as a bell tower. This building is famous for its lean. The leaning is about 5.5 degrees. The building is built to serve as a bell tower. Afterward, it was famous worldwide as a leaning freestanding structure. There was a popular story that Galileo Galilei used the tower for his physics experiment.it is considered as a landmark from medieval Europe and of the most attracted place for the tourist. 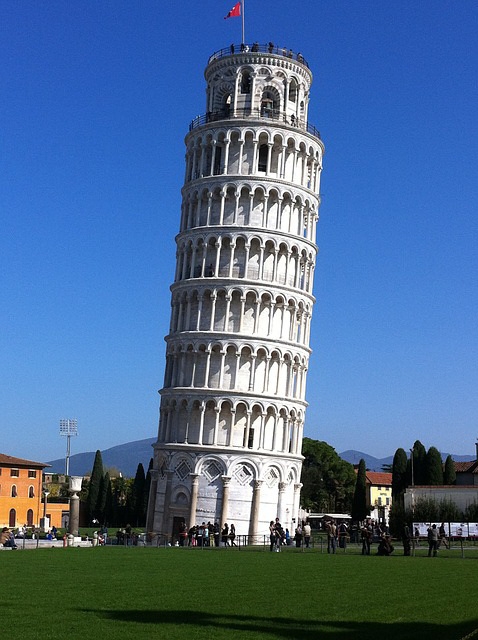 The construction of the tower began in 1173. It remained the tallest structure for two centuries after its construction. The tower has a height of 57 m and including the chamber for the bells, the total height is 60 m. In the year 1178, during the ongoing construction of the 3rd floor lean was apparent. The architects tried to overcome the situation by designing additional stories on the uphill side. But this process failed to do any improvement and as a result, it causes more shrinkage due to the dead load of the structure. The tower has now 8 stories. The ground storey consists of 15 marble arches, the middle stories have 30 and the top bell storey consists of 15 marble arches. Inside the tower, two spiral staircases run-up to the top. One consists of 294 steps and another one is having 296 steps. The additional two steps are required to compensate for the lean. 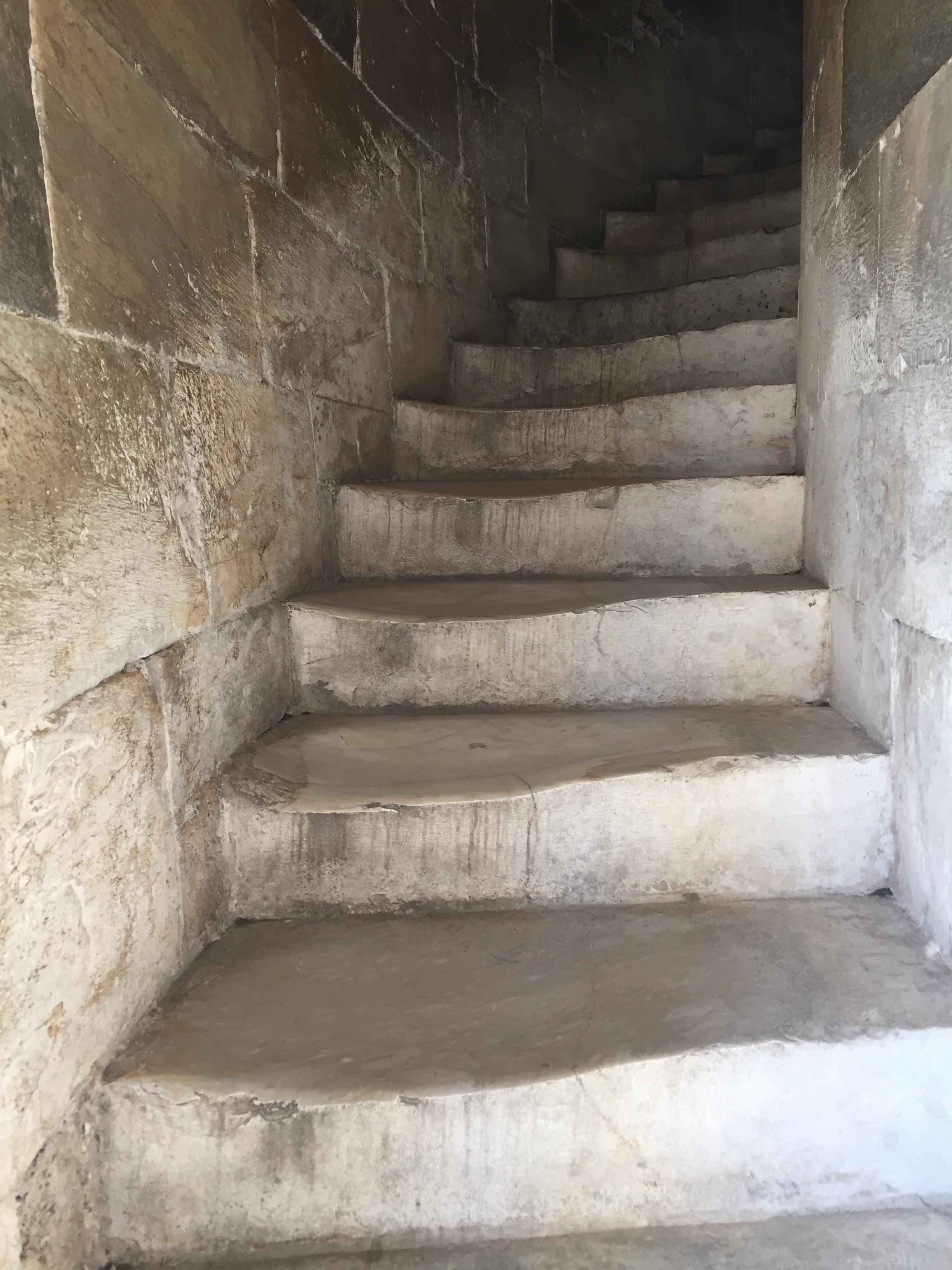 Fig 2: staircase of the tower

In ancient Greek, Pisa means marshy land which perfectly describes the clay, mud, and wet sand below the surface. This type of soil does not withstand heavy loads. This is the root of Pisa’s problem. The foundation of the tower is far from the solid rock strata. The 57 m tall tower sets on the support that are only 3 meters deep and surrounded by sandy ground. Nowhere near the support strong and stable enough for more than 14500-ton pile stone. It is simply like a tall tower on the sponge. It is a miracle that it never collapses. The original mistake occurred at the beginning of the construction, but the tower survived for centuries. Experts calculated that the center of mass of the building lies on the 4th floor. As long as it shifts about the base of the building, it would stand. But if it moves outside of the area, it would be a disaster. The calculation showed if the tower leans about 5.4 degrees it should have collapsed. But by the year 1990, it is already 5.5 degrees. No one knows why it didn’t collapse. However, a few decades ago engineers came very close to bring the tower into a safe zone. One of the most prudent interventions of the tower was boring 361 holes in the foundation and pumping it with 90 tons of cement. 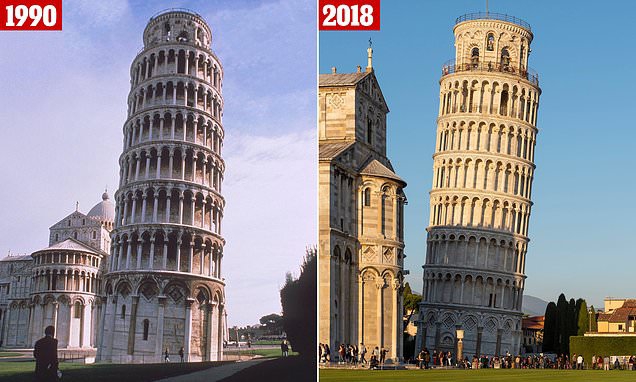 Fig 3: A comparison of the lean

The lean grew gradually each year, but it increased interest in the structure. An architect was given permission to excavate the ground below the tower, a portion that was sunk into the ground. As he dug, water came sprouting out of the ground. The tower tilted another few inches on the southern side. In 1992, as an effort to temporarily stabilize the building was plastic-coated steel tendons are built around the tower up to the second storey. The next year a concrete foundation was built around the tower to counterweigh the load on the north side. These lessened the tilt by a little amount. Again there was a project that came to freeze the ground with liquid nitrogen. But it actually caused a dramatic increase in lean. So the project was called off.

Finally, in the year 1999, engineers began an excavation process on the north side of the building within a month. It showed positive effects. The tilt had been reduced by an inch by the year 2000. The tower was reopened for the visitors. It is thought that this improvement will give a life of about 300 years to the tower. 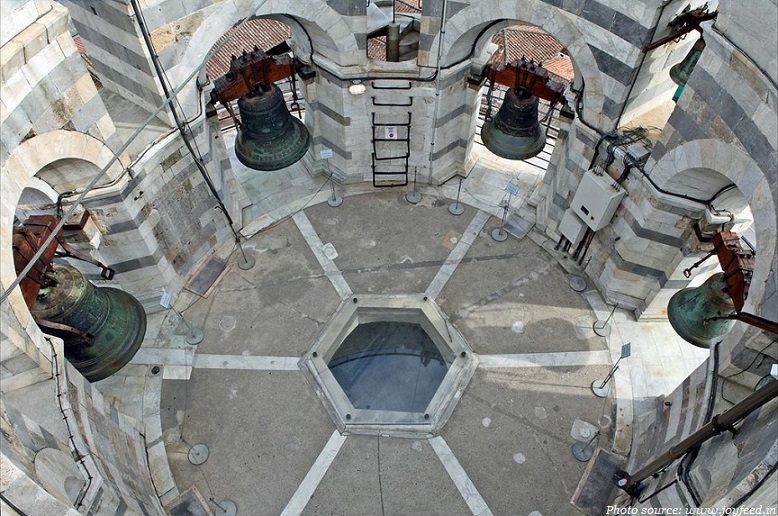 Interesting facts about the tower

The leaning tower of Pisa is one of the Seven Wonders of the World. In spite of the tower is growing lean; the building was acclaimed as an architectural wonder. People from various parts of the world come to admire the beauty of the tower having 200 columns and six external arcades. The tower was declared as a UNESCO World Heritage Site along with the associated cathedral and baptistery in the year 1987.