The Vehicle Assembly building originally known as Vertical Assembly Building is the largest building Kennedy Space Center of NASA. This building was constructed at an area of 8 acres/ 32,000 sq. meters, in 1966. Its former name was Vertical assembly Building. The purpose of the construction of this building was to manufacture space components of vehicles, machines, and equipment. Heavy-lift-launch vehicles namely Saturn V, and space shuttle were manufactured in this building and stacked vertically to launch them into space on one of three mobile launcher plate-forms. With a volume of 365,000 cubic meters, this is included in one of the biggest buildings in the world. The rocket launch site of the building namely “Launch Complex-39” had been constructed at the east coast of the Atlantic Ocean between Miami and Jacksonville. The distinctive quality of this building is that is a single-story building. It is the world’s largest single-story building, and up to 1974, it had remained as the tallest building in the State of Florida.

Construction Plan of the Building:

There are broad bays inside the building with four opening gates around it. Each door of the building is 456 feet high, with four horizontal door panels, and seven vertical panels. The complete opening and closure of the doors take about 45 minutes. The northern gate is used to allow a shuttle orbiter. The door has further been extended by forty feet. 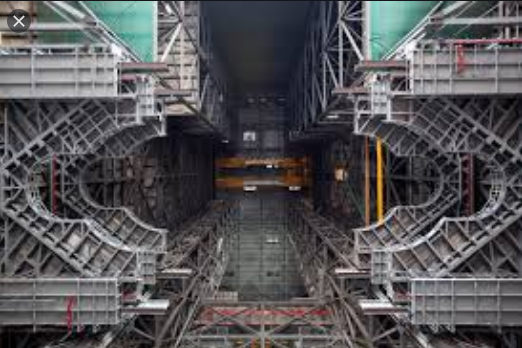 To carry out the lifting and shifting of components of the Space machines and Shuttle, the VAB housed five overhead bridge cranes, including two capable bridge cranes of lifting a weight of 325 tons, and 136 other lifting devices. The building utilizes about 40 megawatts of energy for the air conditioning system. It has about 125 ventilators on the roof side which are supported by very large air handlers which are cylindrical structures on the western side of the building, to keep the air fresh and moisture controlled. The total amount of air present inside the building can completely change (refreshed) in a period of one hour. Due to the vastness of the interior deck of the building, the weather of the building is quite different from the out weather. The rain cloud forming below the ceiling on very humid days are controlled by the moisture reduction system.

Features of the Vehicle Assembly Building:

The exterior of the building:

There is a gigantic American flag pasted on the VAB. It was the largest flag in the world when added as part of United States Bicentennial celebrations in 1976, along with the star logo of the anniversary, later replaced by the NASA insignia in 1998. The height of the flag was 64 meters/ 209 feet, its width was 110 feet/ 33.5 meters. The diameter of each of the stars on the flag is 1.83 meter/6 feet. The size of the blue field in the flag is equal to the size of the regulation basketball court. Each of the Strip-the red and white strips is 9 feet wide. The restoring work of the exterior paint was started in early 2007. Special attention was paid to the enormous American flag and NASA "meatball" insignia. The work repaired visible damage from years of storms and weathering. The flag and logo had been previously repainted in 1998 for NASA's 40th anniversary.

The most extensive exterior damage occurred during the storm season of 2004, when Hurricane Frances blew off 850 14-by-6-foot (4.3 m × 1.8 m) aluminum panels from the building, resulting in about 40,000 square feet (3,700 m2) of new openings in the sides. Twenty-five additional panels were blown off the east side by the winds from Hurricane Jeanne just three weeks later. Earlier in the season, Hurricane Charley caused significant but less serious damage, estimated to cost $700,000. Damage caused by these hurricanes was still visible in 2007. Some of these panels are "punch-outs", designed to detach from the VAB when a large pressure differential is created on the outside vs. the inside. This allows for equalization and helps protect the structural integrity of the building during rapid changes in pressure such as in tropical cyclones. The building has been used as a backdrop in several Hollywood movies including Marooned, SpaceCamp, Apollo 13, Contact, and others.