The Walt Disney Concert Hall is located on the hill Bunker Hill, in downtown Los Angeles, USA, and was built between 1999-2003. It was designed by an architect named Frank Gehry after he was chosen from an international competition in which proposals for this building were put forward by 70 well-known architects. The building now stands as the permanent headquarters of the Los Angeles Philharmonic. Recently, the Walt Disney Concert Hall has celebrated its tenth anniversary. For decades, its design, consisting of a metallic polish surface and hall’s sweeping is linked with Frank Genry’s trademark.

The metallic curves of this building are designed using computer-aided software without which it wouldn’t have been possible at that time. A computer program named CATIA (Computer-Aided Three-Dimensional Interactive Application) was extensively used in the design and plans. CATIA is an object-oriented graphical program that describes an image mathematically as a set of instructions for building the object. This program was mainly used in France for the design of fighter jets and now this program was again used for this revolutionary project. Before CATIA came into being, it was not possible to execute such petals looking at the complex structure and that too with structural steel. Many contractors even hesitated to proceed with the design at first but when CATIA was introduced into the project, everything became possible and the structure came out more beautiful than expected.

Inside the building, the concert hall was constructed as one volume consisting of an orchestra and the audience seated enjoying the performances. The steel-structured roof stretches within the entire area and in this way it eliminates the interior columns. Curved pipes of 6,134 are extended to the ceiling and the hall sounds were designed in accordance with the 1:10 scale model in such a manner that the frequency of sound was increased in the space in order to reduce the wavelength by a factor of ten.

Outside the building, there were uneven undulating forms that symbolized musical movements. Box columns that were tilted forward at about 170 were used on the north side of the building. In the pre-concert room, visitors can get a glance at the sky through the steel-framed supported structure with a view of the stairway to the garden. The reflective panels circulate the light depicting an excellent form of architectural design and also giving an excellent example of energy saving in the broad daylight.

At first, it was thought that the building would be constructed from stone but the need was observed to execute such a complex structure with a more malleable material like thin metal plates. Glass fissures were used on the facade of the building to transfer daylight into the pre-concert room and lobby. Currently, a new subway is being scheduled to run at about 125 feet beneath the building and it is doubted that this may lead to disruption of the acoustics of the hall and destroy its beauty causing trouble to the audience enjoying the performances. 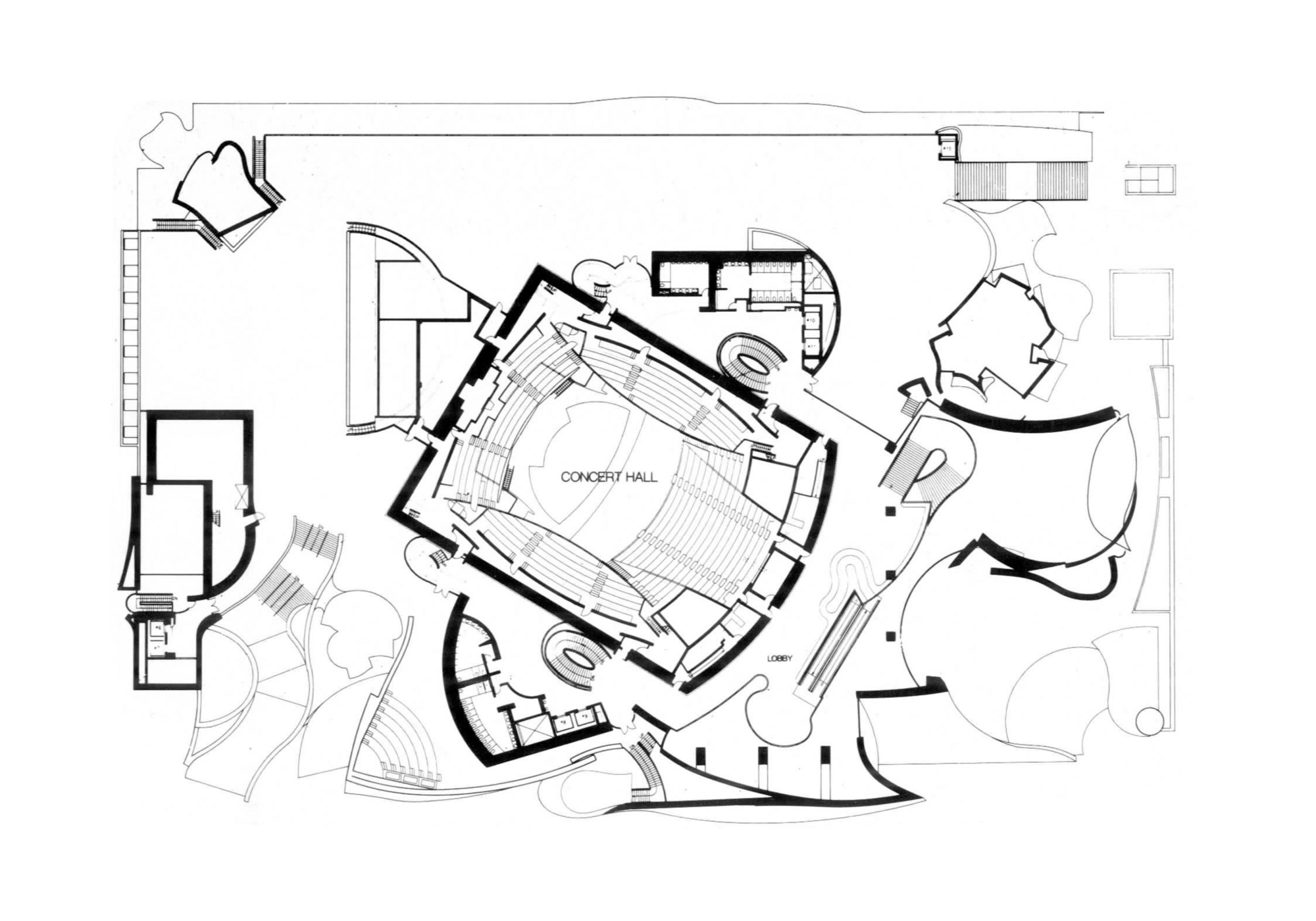 To coat the exterior of the building, around 12,500 corrugated pieces of structural steel were used. In complex areas, thin metal sheets were used whereas in regular areas stones were used. Inside, the lining of the auditorium and other rooms is done using firewood that is used extensively in the back of violoncelos and violas. Around 2,265 seats are surrounding the stage. The stage is made from Alaskan yellow cedar that promotes resonance and can accommodate huge performances. This building has a parking capacity of 2,200 cars and is distributed in 7 levels. This building also contains two amphitheaters. The first one contains 300 seats which are used for children’s shows and the second one has a capacity of 120 spectators. Overall the cost of construction of this spectacular building has been $ 130 million excluding the parking garage which costs $ 110 million. The area of this building is 200000 ft2 and in 1987, Lilian Disney contributed $50 million to build a concert hall as an honor for her late husband, Walt so this building was built as a tribute to him by his wife. 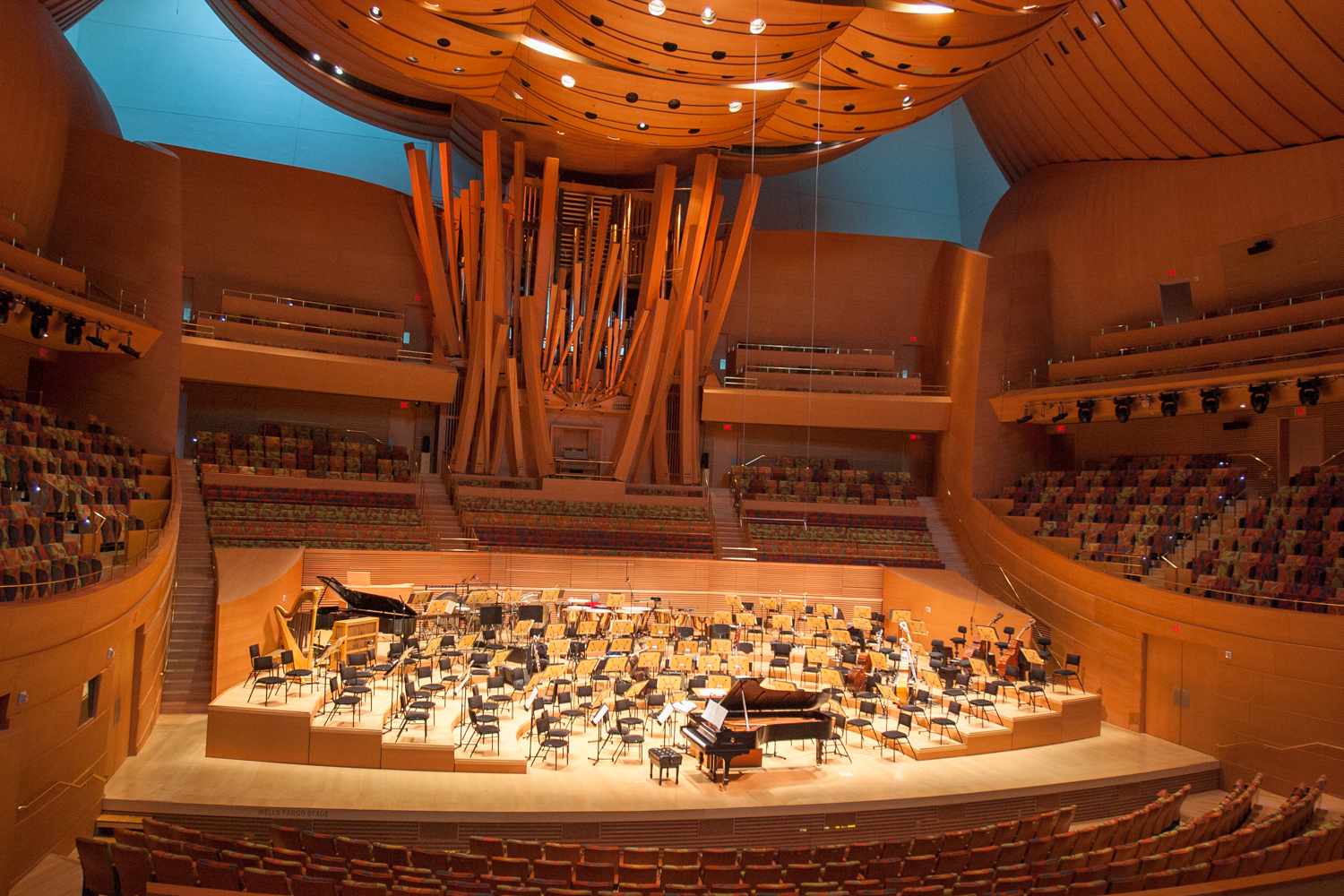 Because of its design, art, and musical performances, this building holds a special place in the world. From children to old age groups of people, no one is debarred from having a sort of connection with this building. Many movies have been witnessed through this and every year this joy is celebrated to honor great people associated with it. From a structural perspective, this building was new because new software was used. Such software, which could only be thought to be used in the military field, then took a revolutionary turn in the field of construction, engineering and architecture. This building celebrates the unique design and concept which could let people think of the variety of options to bring out the creativity in structures using steel in such a way that it is lightweight, long-lasting, and economic. Not only this, in this building natural light was used efficiently to reduce the cost as much as possible. Glass and many other materials were used for this purpose. Also acoustics were used in accordance with the performance of the building which later on proved to be quite successful. Hence, it can be stated that this building is a landmark in civil engineering and holds a special place with its unique design and concept and also, it inspires other great engineers, designers and architects to build more such unique buildings for recreational and other purposes as well.