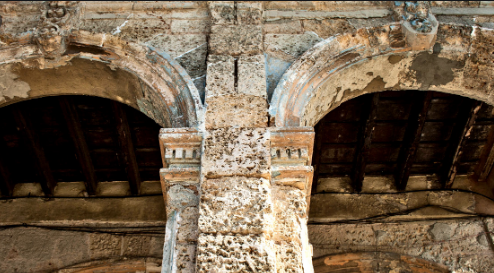 Weathering means the unexpected change in the visual appearance of the structure. The loosening and separation of the surface particles of the structure because of many factors, like frost, extreme up and down in temperature, and rainwater, and chemical attacks, is called weathering. Weathering is caused due to frost, heat, rainfall, and frequent variation of temperature during days and nights. Weathering is felt when the texture of an object is worn out. There are several causes of weathering, which can be summarized in the following four reasons:

Weathering due to Frost:

Water freezes at a temperature of zero degrees Celsius. On lowering down its temperature, the volume of water reduces. On reaching 4 degrees celsius the volume starts expanding. As the water penetrates into the concrete structure, it remains unexpanded. Due to the extreme cold, water inside the pores freezes down. As the water freezes down, its volume expands, which exerts pressure on the walls of the pores. The pressure results in crake in the concrete and masonry structure. Particles in large quantity dismantle from the surface of the concrete. The continuous cracking results in weathering of the surface of the structure.

Weathering due to thermal stress:

This process is most often found in desert areas, where temperatures vary widely between day and night. The concrete structure and masonry stones absorb heat in the day time. The absorption of heat results in expanding the volume of the structure. On the other hand at night time, the temperature of the atmosphere goes down to an extreme level, resulting in the reduction of volume of the structure. The continual reduction in the volume on cooling and expansion in the volume on heating result a weak physical bonding among the particles of the structure. Extremely low temperature also affects the texture of the buildings. The contraction on cooling and expansion on heating up, during days and night, weakens the bonding and adhesion of the particles of structures. Losing the physical bonding of the material will result in the separation of the surface particles from the structure.

Weathering due to Salt Wedging:

When plants and animals cause breaking down the particles of a structure, this process is called biological weathering. As grazing animals walk on the surface of the rocks, the stroke caused by their feet results in the separation of surface particles. Burrowing animals like mole and rabbits burrow into the rock in search of food and shelter. The same case is with the civil work structures. The insects burrow into the structure for the sake of their hunt for food and shelter, makes pores and holes in the walls and floor of the buildings and other structures. Man and animal walk on the floor of the building, traffic passes through the deck of the bridges, plants grow beside the infrastructure-their roots cause crakes in the structure. All the actions carried out by living things are included in biological causes for weathering. Vibration caused by the running traffic across the bridges, subways, and tunnels results in weakening the structures.

How to protect buildings from weathering:

Weathering is a challenge to the durability of the buildings and other civil-work structures. However, we can prevent out structures from the effect of weathering by taking the following precautionary measures: