Tower of London, construction, architectural design and facts about it

Articles > Tower of London, construction, architectural design and facts about it 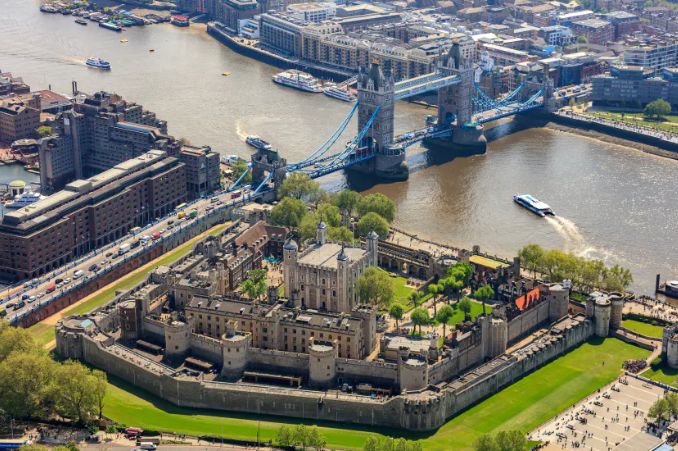 In Central London, there is a historic building located on the bank of Thames River known as Tower London. The Tower of London is the royal palace for the residence of the Queen of Britain. London Tower is located in the heart of the London Borough of Tower Hamlets, separated by an eastern part of the City of London by an open area known as Tower Hill. Its foundation was laid down in late 1066 as part of England's Norman Conquest. The main purpose of the construction of the tower was defensive. It was so located, the traffic of the Thames River was easily be observed from the tower. The tower consists of three enclosures or wards. The innermost ward, behind which the palace was named, was built by William Conqueror in 1078 and was a symbol of resentment, given to London by a new ruling party. The white tower was also known as the Torture of the Tower, in which there was an execution chamber in it. The execution chamber was used to execute the anti-kingdom agents. In the history of the tower, about 22 executions were carried out. The last person, who was executed in 1941, was a German spy. The second portion of the tower is the Inner Ward, which was built during the reign of Kind Richard during the period of 1989 to 1199. The third ward of the tower is a narrow enclosure, which surrounds the whole building of the tower like a boundary wall. This ward was constructed during the reign of Edward I. The basic purpose of the tower was residential, however, the tower was also used for the detention of the prisoners, from 100 AD to 1952, although the founding purpose of the tower was not to keep people detained in the palace.

Some amazing realities about the London Tower:

Most of the old Norman castles were made of wood and timber, but by the end of the 11th century, including the Tower of London, they had been rebuilt or replaced with stones. Work on the White Tower, which gives the palace its name is generally thought to have begun in 1078, but the exact date is uncertain. William commissioned Gundulf, Bishop of Rochester, to oversee its construction, although it may not have been completed until the time of William's death in 1087. The White Tower was the first stone tower in England, and it was the strongest place in the first castle. And it had a beautiful royal residence. The construction of the tower is based on the following three types of construction materials:

Use of Kentish Ragstone :

The construction of the tower was carried out by using many types of stones. The main building material was Kentish ragstone. The Kentish ragstone is a type of hard, durable, grey-colored sedimentary limestone, which is found in the Kent region of England. The stone was excavated from the geological site known as Hythe Beds of the Lower Greensand. For centuries the quarries of the ragstone were utilized for meeting local demand and export purposes.

Use of Common Mudstone:

Some parts of the building are also made of mudstones. Mudstone, a type of mudrock, is a thin-grained sedimentary rock with its first elements which were clay or mud. Mudstone is separated from the shale by its lack of collision. The term mudstone is also used to describe carbonate rocks formed mainly of carbonate mud.

Another expensive type of stone, known as the Caen stone, is a small yellow Jurassic stone mined in northwestern France near the city of Caen. Limestone is a beautiful carved Oolithic limestone formed in shallow water dams in the Bathonian Age about 167 million years ago. The stone is the same, so it is ready for carving. It was imported from the north of France for the purpose of giving details to the Tower, although little was originally found as a stone was placed in Portland in the 17th and 18th centuries. As many of the windows of the Tower were enlarged in the 18th century, there were two real-life examples - although restored -, on the south wall of the gallery.

Decorative Material of the Royal Chambers of London Tower:

Architectural Layout of the Tower:

The Tower was designed on the basis of its strongest and most impressive defensive idea during Saxon London, which archaeologist Alan Vince suggests was deliberately designed. It would have dominated the surrounding area to watch the traffic of the Thames River. The construction of the palace is based on three "wards", or enclosures. The innermost ward consists of the White Tower and is the first phase of the construction of the castle. Around it, in the north, east, and west is the inner ward, built during the reign of Richard I (1189–1199). Finally, there is an outer ward comprising the palace and was built under Edward I. Although there were several stages of expansion after William the Conqueror founded the Tower of London, the general structure has remained the same since Edward I completed the reconstruction in 1285. 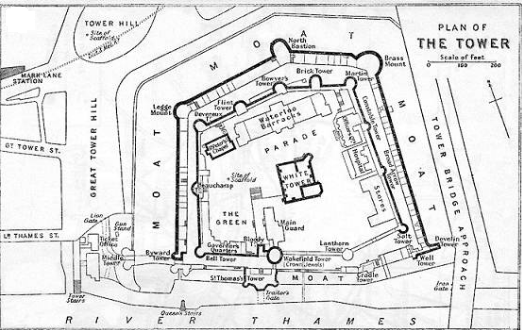 The fort covers an area of ??about 12 hectares (4.9 hectares) with 2.4 hectares and some around the Tower of London forming Trans Liberties - land under the direct influence of the castle and removed for war reasons. The forerunner of the liberation movement was appointed in the 13th century when Henry III ordered the emergence of a piece of land near the castle. Despite popular myths, the Tower of London has never had a permanent torture chamber, although the room below the White Tower had occasional playgrounds. Tower Wharf was built on the banks of the Thames under Edward I and was expanded to its present size during the reign of Richard II (1377–1399).