Golden Gate Bridge, All you need to know

Articles > Golden Gate Bridge, All you need to know 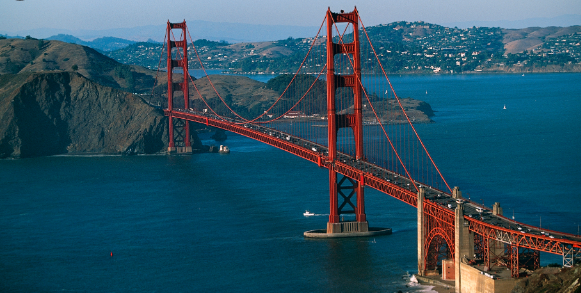 The Golden Gate Bridge is a suspended bridge (suspended with very thick steel cables consisting of wire of thousands km long) across the Golden Gate, stretches over a 2.57495 kilometer wide strait (which connects San Francisco Bay with the Pacific Ocean). This bridge is the only mean of transportation between the U.S. city of San Francisco and Marin County. The bridge is a master piece of civil engineering and architecture, and one of the most famous landmarks in the history of US city San Francisco and state California. The design of the bridge was first drawn by a civil engineering student Joseph Strauss (January 9, 1870 – May 16, 1938) in 1917. The Society of Civil Engineers America declared the Golden Gate Bridge as one of the wonders of modern day. The bridge has been constructed on the strait of North America. The strait of North America connect the Bay of San Francisco with Pacific Ocean. This strait is also an important route for Navigation transportation. The connection of San Francisco with Marin County was also inevitable. Severe opposition to the construction of the bridge from Trade Unions, Navigation Companies and Defence Departments was made. The concept of construction of the bridge is very old, which was not executed for long time because of the strong opposition.

Although the idea of ??a Golden Gate Bridge was not new, the final proposal was published in the 1916 San Francisco Bulletin article of former engineering student James Wilkins. The City of San Francisco City Engineer is estimated to cost $ 100 million (equivalent to $ 2.3 billion today), and it is not expensive at the moment. He asked the bridge engineers if it could be built cheaply. Another respondent, Joseph Strauss, was a well-known engineer and poet, who in his graduation research paper suggested that an 89-mile [89 km] road across the Bering Strait pass. By that time, Strauss had completed about 400 bridges (tow bridges) - most of them inland - and was not working on a new job. Strauss's first drawings were of a large lump on each side of the water-body, connected to a central suspension, which Strauss promised could be built for $ 17 million (equivalent to $ 399 million today).

Local authorities agreed to proceed only with the assurance that Strauss would change the building and receive input from several project experts. The construction of the suspension bridge is considered to be the most efficient, due to the recent steel construction.

The local authorities agreed to proceed only with the assurance that Strauss would change the structure and receive comments from several project experts. The design of the bridge suspension was considered the most efficient, due to the recent development of steel.

Strauss spent more than a decade receiving support in Northern California. The bridge faced opposition, including litigation, from many sources. The Department of Defense was concerned that the bridge would disrupt navigation. The US Navy fears that a shipwreck or bridge damage could prevent access to one of its major ports. The unions want assurance that local workers will be employed in the bridge construction work. The Southern Pacific Railroad, one of the most powerful businesses in California, is contesting the bridge as its boat race filed a lawsuit in court over the scheme, which resulted in boat crews sailing.

Statistics about the Golden Gate Bridge:

Transport before the construction of the bridge:

Prior to the construction of the bridge, the only crossroads between San Francisco and what is now Marin County was a ferry crossing the San Francisco Bay section. The boat service began in the early 1820s, with regular service starting in the 1840s with the aim of bringing water to San Francisco.

The Sausalito Land and Ferry Company, founded in 1867, eventually became the Golden Gate Ferry Company, a company owned by the Southern Pacific Railroad, the world's largest operation in the late 1920s. As well as for commuter trains and customers only, South Pacific pedestrian (boat) boats have become increasingly important and beneficial to the regional economy. A boat crossing between Hyde Street Pier in San Francisco and the Sausalito Ferry Terminal in Marin County took about 20 minutes and cost $ 1.00 per car, the price was later reduced to compete with the new bridge. The journey from the San Francisco Ferry Building took 27 minutes.

Many wanted to build a bridge between San Francisco and Marin County. San Francisco was the largest city in the Americas and was used mainly by boats. Due to the lack of regular communication with the communities around the lake, the city's growth rate was below the national average. Many experts say that the bridge could not be built more than 6,700 feet (2,000 m) across the water, with strong waves, orbits and currents, with 372 ft (113 m) of water depth [16] in the center of the station, and strong winds. Experts say that strong winds and fog would prevent construction and operation.

In May 1924, Colonel Herbert Deakyne held a second hearing on the Bridge on behalf of the Secretary of Defense requesting the use of state-owned land for construction. Deakyne, on behalf of the Secretary of Defense, authorized the transfer of land needed for the construction of the bridge and the road leading to the "Bridging the Golden Gate Association" and in both San Francisco County and Marin County, pending further bridge projects undertaken by Strauss. One of his supporters was a new automotive industry, which supported the construction of roads and bridges to increase demand for cars/vehicles.

The name of the bridge came into use when the project was first discussed in 1917 by M. O'Shaughnessy, city engineer San Francisco, and Strauss. The term came to prominence with the passing of the Golden Gate Bridge and the Highway District Act by the state legislature in 1923, creating a special district to design, build, and support the bridge. San Francisco and many counties along the northern coast of California have joined the Golden Gate Bridge, outside Humboldt County, whose residents were protesting against the construction of a bridge and traffic to be created.