The White House, DC: All you need to know

Articles > The White House, DC: All you need to know

It was designed by the Irish architect James Hoban in the 1790s. After a fire during the War in 1812, it was rebuilt by James Hoban who made some technical changes that included the insertion of electricity as well. Many proposals were made in the late 19th century to expand the house or to rebuild the structure for various reasons but those proposals never got approved. However, a major renovation was executed by President Theodore Roosevelt in 1902, which included the relocation of the President’s offices from the second floor to the constructed temporary Executive Office Building which is called the West Wing. After this major renovation, it was hardly 50 years that this White House began to show structural damages. It was then renovated by President Harry S. Truman in 1952. This renovation included dismantling everything inside the building except the outer walls. These renovations were looked after by the architect Lorenzo Winslow.

Fig 2: Plan of The White House

The foundation of the house was built by enslaved and free African-American laborers along with Employed Europeans. Various other works were mostly executed by immigrants. Scottish immigrants erected the sandstone wall which was decorated with garlands above the north entrance. However, some alterations were made during construction due to a lack of materials and labor. At first, two stories were constructed instead of three, and some inexpensive bricks were used for the stone facades. After construction was completed, the porous sandstone walls were whitewashed with a combination of lime, casein, lead, and glue of rice. 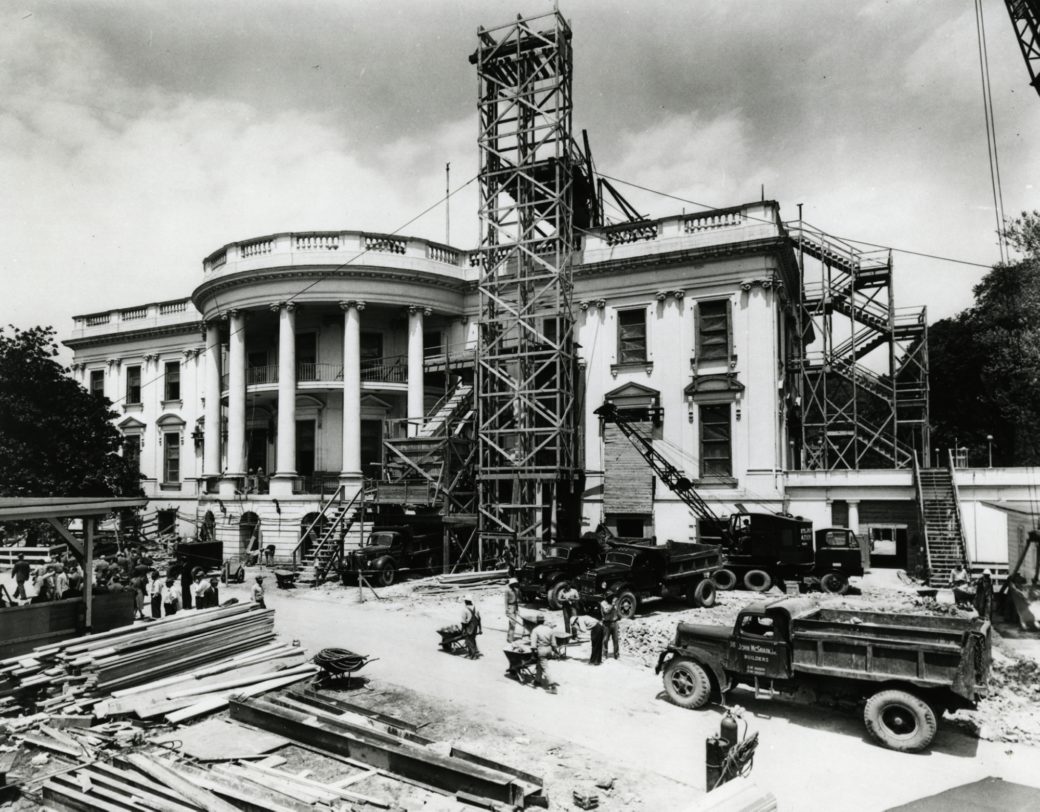 In February, the northwest section of the White House fence was completed by the United States Secret Service (USSS) and the National Park Service (NPC) and it is expected to be completed by August 2020. After that, the south section of the White House fence will be worked upon. Pennsylvania Avenue has been closed from West to East Executive Avenue during the construction of the fence for ensuring the safety of the public. The current tall fence of the White House which is 6 feet and 6 inches, will be replaced by a taller fence of around 13 feet that includes technologies like anti-climb and intruder detection. Also, it is designed to reduce security threats in the present as well in the future. The sections of the White House which are open to pedestrians and cyclists are Lafayette Park, Jackson Place NW, Madison Place, NW, and the northside walk of Pennsylvania Avenue. Several other constructions are going on and some will be proceeded in phases and are expected to be completed by 2021.

Fig 4: Fence of the White House

Presently, the White House is considered a National Heritage Site which is owned by the National Park Service. Overall, the White House includes the West Wing, East Wing, the Eisenhower Executive Office Building, a guest house called the Blair House and the Executive Residence. Also, there is a rumor of a ghost of President Abraham Lincoln wandering inside the building since his death in 1865. Apart from these, many inspirations have been drawn from various other sources that made this splendid building more beautiful. The interiors of the Blue Room inside the White House has been inspired by the Georgian-era Irish country houses. All these building inspirations have been cited in the official White House Guide and the White House Historical Associations Publications. There are eleven bays in the White House and the ground floor is concealed by a carriage ramp and parapet. A floral festoon is sculpted above the entrance and a balustraded parapet hides the roofline. All these amazing details make it a landmark in Civil Engineering and till today it holds a special place for its prestigious status and beautiful building design. The staircase near the hallway is antique and is admired by every visitor. Every detail in the White House reflects something about the earlier Presidents and all their remarkable journeys during their tenure. The continuous construction process is going on to maintain the structure of this building and in the future, many upgrades in the security can be expected as the world is walking into the modern era of technologies. Now, this White House has become the home of the newly elected President of the United States of America, Joe Biden and soon the White House will see its glorious years for the bright future of its people.