Bridge Abutments and their ten types 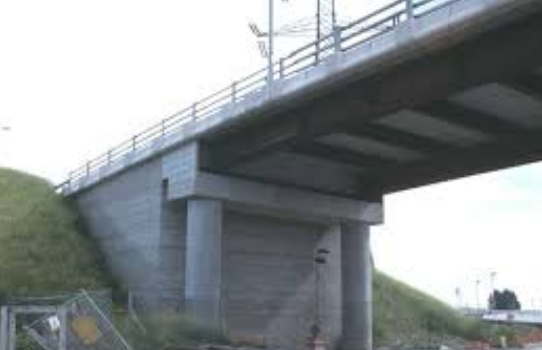 2. Wing Wall: This component of the abutment is only included in the abutments which connect the bridge with an embankment. These are short retaining walls that prevent the embankment from erosion.

3. Back Wall: It is also only included in embankment walls. Back walls are vertically constructed at ends of the most bridges. The back-walls support the expansion joints of the bridge span/deck.

4. Pile of the Abutment: Pile is the filament of the abutment which connects the ground foundation of the abutment with the bridge's seat. The length of the pile depends on the height of the bridge and the depth of the obstacle (stream, river, and canal).

Most fundamental types of abutments are as under:

It resists the horizontal earth and water pressure with its dead weight. The foundation of such abutments is very wide and heavy. As the name mentions, the structure of the abutments is simply placed on the ground, the gravitational pull of earth makes the abutment to sustain.

This type of bridge abutment has wings perpendicular to the face which acts as counter-forts. These are very stable types of abutments. The wing walls of the abutment are at a 90-degree angle (perpendicular) to the seat of the bridge. A U-shaped Abutment has a pair of piles, which are at a distance equal to the width of the bridges. These types of abutments are constructed with reinforced cement concrete. At the bottom, both the piles of the abutment are connected with each other by means of foundation. Both the piles have a common foot.

There are two purposes of a Cantilever Abutment, one is to retain the soil behind the ends of the bridge, second is to support the bridge superstructure. Some wall abutments are referred to as stub abutments. These abutments are made as short as possible and are installed at the top of fill embankments. Stub abutments usually only retain soils that are slightly higher than the superstructure thickness. Stub abutments can be very economical; however, they tend to increase the length of the end spans. Other wall abutments can be much taller and are often constructed to the full height of the crossing. Full height abutments are more difficult to build; however, they tend to reduce the length of the end spans.

It is a tall height abutment which is constructed at the lower level roadway and should support the entire embankment. This abutment is costly and is generally used in congested urban and metropolitan areas where structure depth is critical.

Usually supported on piles, they are short abutments installed at the top of an embankment or slope of the embankment. They are very and not visible from above ground level.

The pile bent abutment is a variant on a spill-through abutment that replaces the wall-like supports with a series of piles, or columns, to hold the support beam.