The roof is the most fundamental part of a building. The concept of a building evolved from the invention of a roof. The primitive man, in order to protect himself from rainwater, founded the concept of the roof. A room, house, or building is an evolved form of a roof. Today there are several types of roofs, all of which fall under three categories.

This type of roof is very common all over the world, especially in multistory buildings. Except for the uppermost floor of a building, the construction of a pitched and curved roof is almost impossible. Flat roofs are constructed by means of placing iron or wooden girders on the wall and then the material of the roof is supported by means of the girders or beams. There is another method of construction of flat roofs, and that is the RCC method. In this method, the Steel Reinforced Concrete is used as a roof. The RCC type of roofs is very common these days. Their durability and strength are unbeatable. In a building of hundreds of floors, the use of the RCC roof is adopted. Flat roofs are easy to construct, and no special skill is needed to construct a flat rood. Flat roofs are very common in regions where there is no snowfall. As the rainwater accumulates on the surface of flat roofs, these roofs are sloped a little and the rainwater is drained out. The span of these roofs ranges from 1 meter to several meters. The wider the span of the roof is, the larger the number of beams, girders, TR and Truss, etc. There are two types of flat roofs: 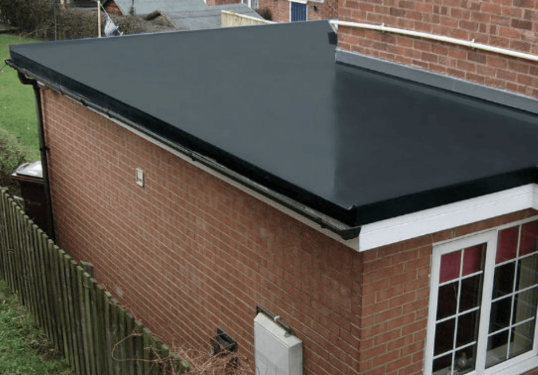 A roof constructed with tiles, girders, and TRs. TRs are placed on the girders/beams/truss as their ends touch the walls of the room. Then the tiles are placed on the TRs to form the roof. Above the tiles, the plastic sheet is scattered to prevent seepage of water and then the roof is paved with concrete. The cost of this type of roof is very low and the construction method is also very simple and easy. No shuttering is needed in order to construct these roofs. These roofs are very common in the sub-urban areas of almost all the countries of the world, especially the developing countries, like those of African, Middle Eastern, South Asian, and North American Countries. In Pakistan, India, Bangladesh, and Iran, this type of roof is very common. An architect of average skill can, beautifully, construct this type of roof.

As the name indicates, a roof made up of pre-stressed concrete. A web of steel rods is first installed on the roof with the help of shutters. The steel web structure is then covered with concrete. The durability of this type of roofs is greater than that of the Tile and TR roof, because, the steel structure is buried inside the concrete material, thus preventing it from rusting and oxidation. RCC roofing is common in buildings ranging from the cost of a few thousands of dollars to trillions of dollars. Even the roofs of the State empire building and Khalifa Burj Tower are constructed with Steel RCC.

Pitched roofs are generally constructed in hilly and mountainous regions, where the rain and snowfall are very high. In order to protect the roofs from seeping water, they are conically pitched up. The pitched up roofs, slip down the dumped snow, and unload the roof to maintain its stability. The pitched roofs are classified into two groups: 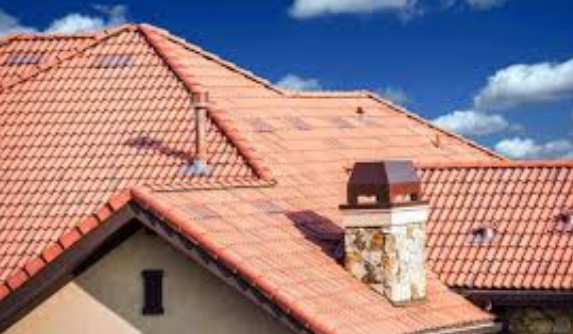 Single pitched roofs are sloped from the only side and the other side remains elevated. The single pitched roof is very easy to construct. As it is a one-panel roof, therefore it does not need any bridge.

The double-pitched roof consists of two plan surfaces. Both the surfaces are attached to each other at a central ridge and the sides of the two surfaces are placed on the load-bearing walls. The surfaces of the roof are known as Gables of the roof. The gables attached at one end make a triangle. The upper angle is about 90 degrees, and the angles between gables and the load-bearing walls are about 45 degrees, thus completing 180 degrees of a triangle. These types of roofs are constructed with the help of a truss. The truss provides sustainability to the gables of the roof. The gables are made up of wavy metallic plates. The wave shape of the gables channelizes the rain and snow. A double pitched roof may be symmetrical and asymmetrical as well. The symmetrical roof has the ridge quite in the middle and the area of both the gables is equal, while in an asymmetrical pitched roof, the size and area of one gable are greater than that of the other, and the ridges of the roof are not in the middle.

The third type of roof is the curved roof. A curved roof is a roof that has a curved style. Both the pitched and the curved roofs are aimed at the same. Only the style and design are different. A curved roof generally consists of a single gable with one side slope down and the other side is flat (with very little slope). But in some cases, a curved roof is so designed that both the ends of the single gable are sloped down with an elevated center. It gives a look of an arch. These types of roofs give more attraction and charm to the building. The purpose of these roofs is to shed the snow and rainwater. But modern architecture is evolving these roofs into multi-curved roofs. Keeping in view different designs of the curves, these roofs are classified into three groups: 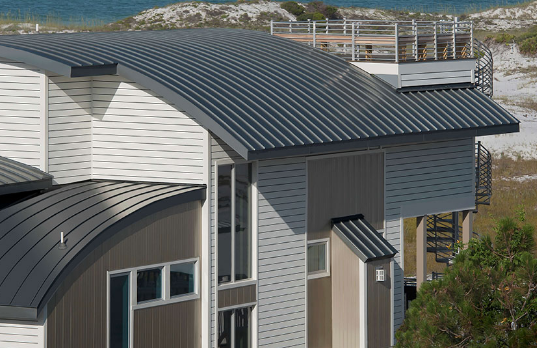 The Earthen roofs are made by using soil instead of concrete. Like the Tile-TR roof, the earthen material is put on the wooden sheathing supported by wooden or metallic beams or girders. These are very common in the rural areas of developing countries, like Pakistan, India, Iran, Afghanistan, Bangladesh, and other Asian and African Countries. These types of roofs are bad conductors of heat. The Interior of the rooms gives a very pleasant atmosphere, both in summer and winter.