What is a truss? Different Types and components of trusses

Articles > What is a truss? Different Types and components of trusses

Trusses are widely used in bridges, buildings, and other infrastructures. The function of a truss is to provide turgidity to the skeleton. A truss is an assembly of metallic elements (bars, rods, pipes, etc). The elements of a truss are interdependent and exert force on one another, to survive the external load and burden. A truss is used instead of RCC and concrete beams. Trusses are of different types with regard to their designs and shapes.

Basically, there are two types of the truss on the basis of their design and working mechanism.

In pitched truss, the chord (upper stringer) and bottom (the lower stringer) are not parallel. The chord of the truss is extended outward like an arch or a cone. The extended chord of the truss provides extra strength to the truss. The pitched trusses are used in constructing roofs of the buildings, especially in the area of snowfall. The cone-shaped roofs do not allow the snowfall dump on the roof while making the snowfall slip down from the edges of the roof.

Mixing both of the types the truss are further classified into the following types:

It is a very simple type of trusses, in which the truss members form a series of equilateral triangles. These are included in the category of the parallel truss.

Bowing Strings are used in this type of trusses. The bowstrings act as an arch. These strings give extra turgidity to the truss. These were, first used in World War II. The need for such type of trusses was felt, the curved roof of aircraft was to be designed.

In this type of trusses, two angled members/struts support a vertical strut. It is very simple to design but frequently used truss. In this design, the vertical member/strut is called Kingpost. 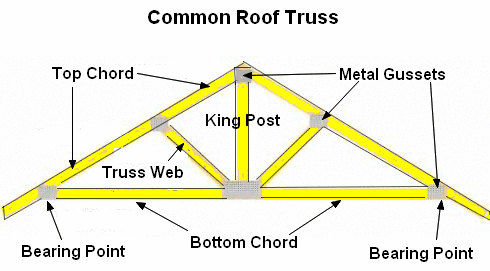 Lenticular Truss was, first time used in the Gaunless Railway bridge of Stockholm and Darlington in 1823. In this type the chord and the bottom, both are arched and connect with each other at both ends. 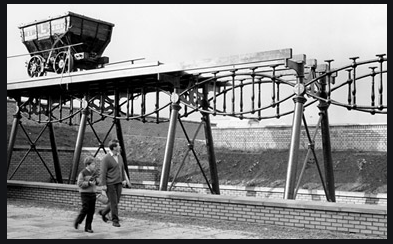 In these trusses, the inclined members are used which cross over one another at frequent points. An American architect “Itheal Town” designed it, this is why is known after his name.

Almost all the trusses are made up of three fundamental components. The chord, the bottom, and the members.

1. Upper stringer in a truss is called the chord.

2. The lower stringer of the truss is called the bottom.

3. Members, also called struts are the bars, rod, and strips that connect the chord and bottom of the truss.