What are beam bridges? Types and Structural elements of a beam bridge

Articles > What are beam bridges? Types and Structural elements of a beam bridge

Introduction to the Beam Bridges:

Beam bridges are also known as Stringer Bridges. These bridges are the simplest and easy to construct bridges in the world. Each part of the bridge span needs direct vertical support. Such types of bridges consist of at least two beams/ girders or the stringers placed on the abutments or piers at both ends. There are different methods for constructing beam bridges. There may be a pair of beams connecting two abutments and then another pair of beams connecting the next abutment or maybe a pair of a long beam supported by abutments at different intervals of distance. Piers/ abutments are constructed first at different intervals of distance, then, the concrete beams or steel girders are placed horizontally on the abutments. The beams run across the water body. Once the beams are placed, the concrete slabs are placed on the beams with the help of heavy machinery. In case, heavy machinery is not available, then the construction is carried out by means of scaffolding and shuttering. 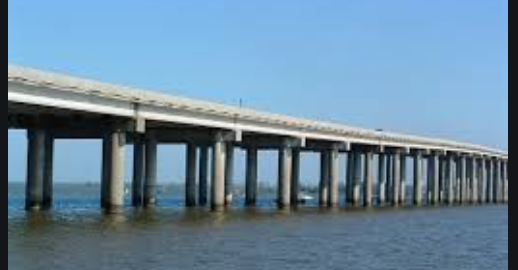 The beams are constructed over the piers without shifting them from one place to another. Similarly, the structure of the bridge deck is also constructed above the beams in order to prevent the troublesome job of shifting the slab from the ground to the top of the abutments and beams. In modern days, due to the availability of heavy cranes and machines, the structural parts of the bridges are constructed on the ground except for the construction of piers. The construction of piers is carried out over the place where they have to remain forever. After completing the construction and compaction of the parts like slabs, beams, and defensive parapets on the ground, they are lifted up to the top of the abutments.

The mechanism of construction in all types of beam bridges is the same. However, because of the different types of materials used in their girder/ beams, these bridges are classified into Box Girder Bridges, Plate Girder Bridges, Truss-beam Bridges, and I-shaped Girder Bridges.

Plate girders are simply made up of the iron/steel plates shaped like I. The I-shape of the girders increases the stability of the girder. The strength of the plate is dependent on the thickness of the plates. Like, box girders, these plates are installed on the piers and jointed with the help of nut-bolts. Then the deck slabs are places on the plate girders. The girder may vary in length. It may extend up to the length of the bridge span as well as up to the distance between two abutments.

Some of the beam bridges are made up of trussed structures made up of steel and iron. The truss structure is place instead of a concrete beam or a girder. Once the truss is placed on the abutments, the slabs of either metal or RCC are placed over the truss. The difference between a truss-beam and box girders is because of the difference in the material used in the two, but still, the function of both is the same.

It is a very simple but the most popular and durable type of bridge. The construction of beam bridges is, presently prevailing all across the globe. These bridges need abutments and piers to sustain. Still, there are some bridges that do not need abutments installed in the water body, but rather the whole span of the bridge is placed on two abutments on either side of the bridges. As far as the structural parts of the bridges are concerned, the following parts are considered to be very essential and fundamental elements of the bridge. The completion of the beam bridges is not possible while ignoring any of the following elements.

Foundation: Abutments and pillars are constructed on a wide span concrete foundation. The function of the foundation is to transfer the load of the whole bridge span and the traffic to the ground. The foundation protects the piers/abutments from shoving down into the earth.

Piers/ Abutments: Piers/abutments are the pillars which are installed at both ends of the bridge and deep inside the water. These pillars may be single-stranded or in the form of pairs. These pillars bear the burden of the whole bridges and the traffic passes through it. Beams are placed on these pillars.

Beams: Beams of the bridge can be made of truss, RCC, metallic girder, or CFST. Whatever material is used while constructing the beams, the function remains the same. The function of the beam is to join the abutments and to bear the load of a deck of the bridges.

Deck of the Bridges: The function of the deck of the bridge is to accommodate the traffic to pass. The deck is generally made up of concrete, reinforced concrete, metal, CFST. The top of the deck is covered by bitumen. The bitumen provided friction and road grip to the vehicles, thus protecting the vehicles from slippage.