What are Water Head and Water Pressure?

Articles > What are Water Head and Water Pressure?

Definitions of Head and Pressure:

Head is a height at which a pump can give the fluid. It is measured in feet or meters of the output vessel of the pump.
Pressure is a force exerted by a column of liquid of a fixed height over a unitary area It is dependent.

Water head is a measurement method of performance of a pump. Water pumps are very commonly used all around you to move a liquid from one point to another. Moving water from ground level to the high altitude water storage tanks, pull water out of a deep well and supplying water to your agricultural fields to water the plants etc. is carried out by water pump. How far a water pump can move water and how much quantity of water in a specific unit of time can be moved from one point to another depends on the performance of a pump. All types of water pumps operate in a similar way, i.e. sucking water from one end and pushing it out from the other end. 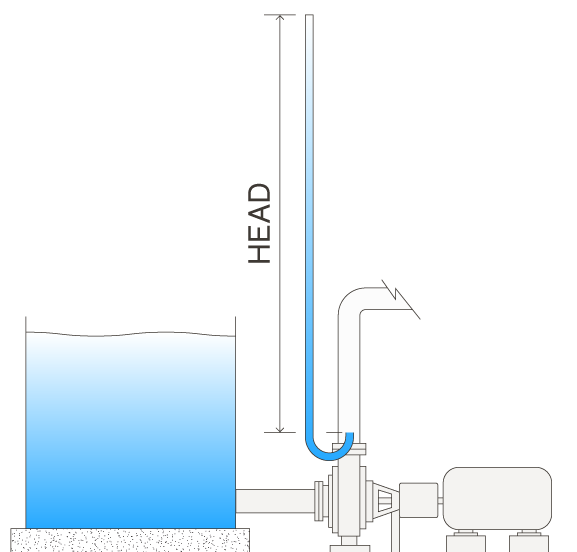 The pump’s suction head is similar to pumps head except it is opposite. Being opposite, it rather measures the depth at which a pump can suck the water unlike the water head is measures the height of water can a pump push.

The flow of water from a pump is affected by two equal but opposite forces, i.e. Pump head and Suction Head. If the level of water is below the level of pump, then the total head will be equal to water+ suction head.

Mathematically speaking, Total Head= Water Head=Suction Head. For example, the pump is pumping water up to the height of 10 ft (Pump Head=10 ft) and it is sucking water from a depth of 15 ft (suction head=15 ft). Then the total head will be 25 ft.

Thus, the total head is equal to the distance between the levels of water tank and water head.

For example a pump is installed on a water tank which is 15 feet high than the level of the pump, and the height at which water is moved is 50 feet. The equation will be: 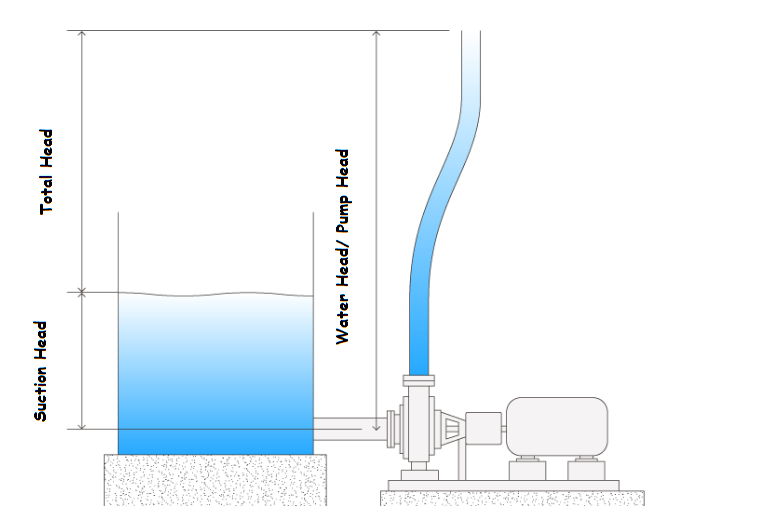 Pump supplies the water at different levels of water head. Ultimately, there is a level above which the pump can not drive the water. That is the Maximum Pump Head. At this level the flow of water becomes zero. Pump can not, further, move the water ahead. This level depends on the power, quality and mechanism used in a pump.

Pressure is a force exerted by a column of liquid of a fixed height over a unitary area It is dependent on the specific gravity and density of liquid. Although both pressures and heads are parameters used to measure the performance of a pump but head is not directly measured. Manometers on the pump suction and delivery line give the measure of the pressure. Measurements given by manometers indicate differential pressures imposed by the pump between suction and discharge. These measures are read in [bar] [atm] [psi] [ft H2O] etc. Specific gravity γ has to be considered to evaluate the correspondent head. Today, modern pump companies continue to rate a liquid’s force as a unit of energy against gravity. If we apply this same force in another direction — such as against the interior sidewall of a pressurized tank — we would use the term "pressure."

If the liquid is not water (examples: paint, chocolate syrup or gasoline), the liquid’s specific gravity must be factored into the formula.

The constant 2.31 comes from the following: A square foot of area contains 144 square inches; a cubic foot of ambient-temperature water weighs 62.38 (62.4) pounds per cubic foot at 70 F at sea level.

If I poured 1 pound of water into a tall, narrow vessel that occupies 1 square inch of floor space, I would fill that vessel to 2.31 feet of elevation. Now let’s apply this information with some examples.

Imagine you were on a clear mountain lake taking a ride in a glass-bottomed boat. If the viewing windows were 6 feet below the water’s surface, how much pressure would be acting on the glass panes? Answer: The pressure acting against the windows would be 2.6 pounds per square inch, or 6 feet ÷ 2.31 = 2.6 psi.