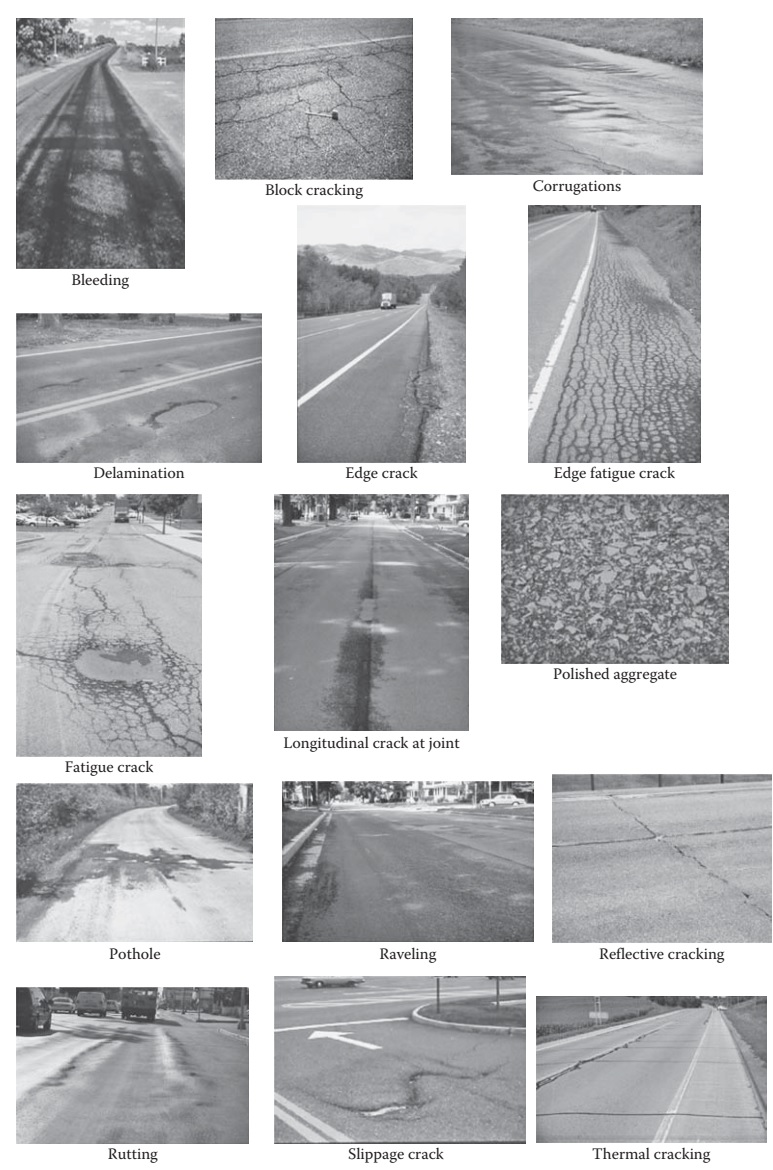 Bleeding is the appearance of asphalt binder on the surface of the pavement. This is a surface defect caused by excessive asphalt binder in the surface asphalt mix layer. It is measured in square meters. The different conditions of bleeding include discoloration, covering of aggregate with a thin reï¬‚ective surface, and loss of texture.

Corrugations are ripples formed laterally across an asphalt pavement surface. These occur as a result of lack of stability of the hot mix asphalt (HMA) at a location where traffic starts and stops or on hills where vehicles brake downgrade. The causes of the lack of stability are too much or too soft asphalt, a high sand content, and an excessive presence of smooth and rounded aggregate in the mix.

Edge cracks are found in pavements with unpaved shoulders. They are crescent-shaped or fairly continuous cracks that intersect the pavement edge. The cracks are located within 0.6 m of the pavement edge adjacent to the shoulder. Longitudinal cracks outside of the wheelpath and within 0.6 m of the pavement edge are also classified as edge cracks.
The cracking is due to the lack of lateral (shoulder) support, base or subgrade weakness caused by frost action, and inadequate drainage. It is measured in meters, and severity is reported as low (cracks without breakup or loss if material), moderate (loss of material and breakup in up to 10% of the cracked area), or high (loss of material or breakup in more than 10% of the cracked area).

Fatigue cracks generally begin at the wheelpath. Edge fatigue cracks are formed due to poor underlying support at the edge of the pavements with paved shoulders. This distress, found on wheelpaths, begins as a series of interconnected cracks and develops into a chicken wire/ alligator pattern. Interconnected cracks give rise to many-sided, sharp-angle pieces, usually with a maximum length of 0.3 m. Repeated tensile stress/strain at the bottom of the asphalt mix layer, caused by traffic, leads to fatigue cracking. It starts from the bottom and moves upward. The cracked area must be quantifiable in order to be counted as a fatigue crack. The cracked
area should be measured in square meters, for each of the three severity levels: low, medium, and severe. If within an area, there are different severity levels and they cannot be distinguished, the entire area should be rated as for the highest severity rating. A low-severity area is one in which there are no or few connecting cracks, the cracks are not spalled or sealed, and there is no evidence of pumping. Moderate-severity areas are those in which the cracks are interconnected, forming a complete pattern, and cracks may be slightly spalled or sealed, with no evidence of pumping. In a high-severity area, the cracks are interconnected with moderate or severe spalls, forming a complete pattern; pieces may move under traffic; cracks may be sealed; and pumping may be evident.

Longitudinal joint cracks develop at construction joints because of poorly paved joints or improper construction techniques. They are measured in meters, and their severity is expressed in the same manner as in block cracking.

Polished aggregate is the exposure of coarse aggregate due to wearing away of the asphalt binder and fine aggregates from the surface asphalt mix. It is measured in square meters.

Bowl-shaped holes, with a minimum plan dimension of 150 mm in the pavement surface, are called potholes. There are four main causes of potholes: (1) insufficient thickness of the pavement to support traffic through winter–spring freeze–thaw cycles; (2) poor drainage, leading to accumulation of excess water; (3) failures at utility trenches and castings; and (4) paving defects and unsealed cracks. For a distress survey, the number of potholes and the square meters of affected area are recorded. Severity levels can be reported as low (<25 mm deep), moderate (25 mm < depth < 50 mm), or high (>50 mm deep).

Raveling refers to wearing away of the pavement surface by loss of asphalt binder and displacement of aggregates. The process starts as loss of fines and can continue to a situation with loss of coarse aggregate and a very rough and pitted surface. Raveling is caused by the action of water that finds its way through the surface of the pavement because of poor compaction and hence low density and relatively high voids, and it can initiate the potholing process. It is measured in square meters.

Reï¬‚ective cracks are those in asphalt overlays caused by discontinuities in the pavement structure underneath. This can be due to old cracked asphalt pavement or joints in concrete pavement underneath. The severity levels are recorded in the same manner as in block cracking.

A rut is defined as a longitudinal depression in the wheelpath, with or without transverse displacement. It can be measured with a straight edge or a profiler at regular intervals. A rut is a physical distortion of the surface, and it also prevents the cross drainage of water during rains, leading to accumulation of water in the ruts and increasing the potential of hydroplaning-related accidents. Generally a rut depth of 0.5 in. is considered a rutting failure. Rutting is the result of repeated loading, which causes accumulation, and increase of permanent deformations. Rutting can be (1) low- to moderate-severity rutting—one-dimensional densification or vertical compression near the center of the wheelpath, caused by densification of mixes with excessive air voids in the in-place mix under traffic; (2) moderate- to high-severity rutting—a depression in the wheelpath along with humps on either side of the depression, caused by lateral ï¬‚ow due to plastic deformation, resulting from shear failure of the mix under traffic, and generally associated with very low air voids in the mix; and (3) rutting accompanied by cracks on the surface of the pavement, caused by rutting in underlying layers, such as the subgrade or subbase.

Slippage cracks are typically crescent- or half-moon-shaped cracks produced when vehicles brake or turn, which causes the pavement surface to slide or push. This is caused by a low-strength HMA or a lack of bond between the surface and lower courses.

Thermal cracking occurs in the form of transverse cracking, which is defined as cracks that are predominantly perpendicular to the pavement centerline. These cracks occur at regular intervals. Thermal cracks can be caused by the fracture of asphalt mix due to a severe drop in  temperature or by thermal fatigue caused by repeated low- and high-temperature cycles. The severity of thermal cracking is measured by the width of the crack. A low-severity transverse crack is one with a mean width of ≤6 mm, or a sealed crack with sealant material in good condition and a width that cannot be determined. A medium-severity transverse crack is one with a mean width >6 and ≤19 mm, or any crack with a mean width ≤19 mm and adjacent low-severity random cracking, while a high-severity crack has a mean width >19 mm, or ≤19 mm but with adjacent moderate- to high-severity random cracking. Only cracks that are >0.3 m in length are counted. The number and length of transverse cracks at each severity level are recorded. The entire transverse crack is to be rated at the highest severity level that is present for at least 10% of the total length of the crack. The length, in m, is the total length of the crack. If the cracks are sealed, then the length of cracks with sealant in good condition (for at least 90% of the crack) should be measured at each severity level. Part of the thermal transverse crack extending into a load-induced fatigue crack area is not counted.