Difference Between RCC and Prestressed Concrete

In ordinary reinforced cement concrete, compressive stresses are taken up by concrete and tensile stresses by steel alone. The concrete below the neutral axis is ignored since it is weak in tension. Although steel takes up the tensile stresses, the concrete in the tensile zone develops minute cracks. The load carrying capacity of such concrete sections can be increased if steel and concrete both are stressed before the applications of external loads. This is the concept of prestressed concrete. As per ACI committee prestresssed concrete is that concrete in which internal stresses of suitable magnitude are introduced so that the stresses resulting from the external loadings can be counteracted to a desired degree.

In R.C.C. members, prestress induced is of compressive nature so that it balances the tensile stresses produced due to external load. It makes the whole section effective (the concrete area in the tension zone also) in resisting loads.

In reinforced concrete, prestress is commonly introduced by tensioning the reinforcement. So, compression is induced in the zones where external loads would normally cause tensile stresses. If the prestressed concrete beam of rectangular section subjected to a prestressing force P, at the centroidal axis.  Due to this force, a uniform compressive stress of ‘P/A’ will be induced in concrete. Under the action of loads, the stress at any points will be ‘My/I’.

Figure showing load on the beam

Ordinary mild steel and deformed bars are used in RCC are not used in PSC (prestressed concrete) because their yield strength is not very high. In the prestressed concrete, loss of prestress (about 20 %) occurs due to many factors. If mild steel bars or HYSD bars are used then very little prestress will be left after the losses and will be of no use. Therefore, high tensile strength steel is used for prestressing. In addition to the high strength, the steel used in prestressing must have a higher ultimate elongation. Various forms of steel used for prestressing as follows:

A strand or cable is made of a bundle of wires spun together. The overall diameter of a cable or strand is from 7 to 17 mm. They are used for post-tensioning systems.

Since high tensile steel is used in prestressed concrete, the concrete used should also be of good quality and high strength. Therefore, the code recommends a minimum mix of M 40 for pre-tensioned system and M 30 for post tensioned system. These mixes have high strength and a high value of modulus of elasticity of concrete which results in less deflection.

The comparisons between the RCC and prestressed concrete 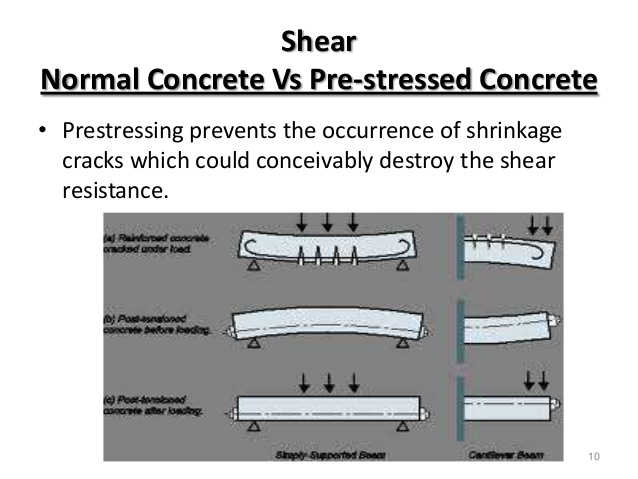