What is the difference between Hoyer system and Freyssinet system of Prestressing?

Articles > What is the difference between Hoyer system and Freyssinet system of Prestressing?

The Hoyer system is generally used for the production on large scale of pre-tensioned structural element of the structure only.  Such type of method consists of stretching the wires at greater distance apart. Then the concrete is poured so that many structural elements can be produced in a single line and for that, the shuttering should be provided. Once the concrete hardens then the wires are cut or released. Also in one line, the remaining wires will be cut off. By this method, the prestress is transferred to the concrete structure as there is bond between the tendons and concrete.

Post-tensioning system: the main principle in the post tensioning system is to introduce prestress in the concrete member casted earlier and by tightening the tendons which are accommodated in the ducts which are formed while beam is casted. When the tendons are pulled and tightened with the help of jack arrangement against the end of concrete element then the required prestressing force is obtained suitably. Once the wires are stretched then they are anchored in the stretched positions against the end of concrete member with the help of wedging device. The different wedging devices and arrangement of wires are available in the different systems. 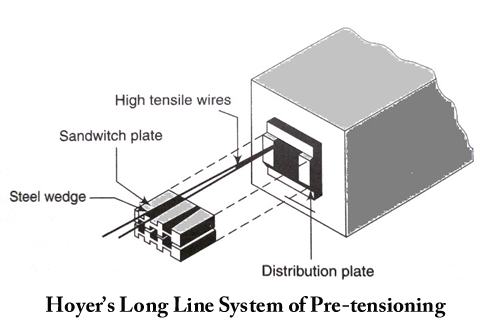 It is very necessary to measure the load applied with the help of jack arrangement and the extension of reinforcement so that the proper prestress in the reinforcement will be ensured. To get a idea about the stretching of the steel it is necessary to do the extension measurements. The sides of ducts may obstruct the stretching of the reinforcement at the end remote from the jack arrangement while this part may not receive the full tension if properly not carried out. When the curved cable is provided them the above-mentioned defects may be produced. In other cases, there is the possibility of extension in some other part of the tendons which are overstressed. Therefore the prestressing force should be measured.

At the end of the member, the excessive bearing stresses are produced because of the anchoring devices which bear against the cracks. Therefore additional reinforcement is provided in the member so that the local splitting and failure due to shear will be avoided.

The method of prestressing involves pre-tensioning and post-tensioning methods only in the practical cases. The applications of such type of methods are different.

In the case of pre-tensioning method prestress, there is a compressive force in the concrete which is because of the bond between the concrete and steel wires and that is kept stretched between the buttresses. If the limited sizes of the concrete are to be produced as mass-production then this method is adopted economically. As the transporting bigger products and handling them is practically impossible and very costly. The economical length of the concrete member should is up to 20 m if such type of prestressing is adopted. There is considerable difficulty occurs in the transporting of concrete members of longer than 20 m length.

There are many ways to do the stretching of prestressing wires in the method of post-tensioning once the concrete is hardened. The following ways to do it:

Such methods may be adopted at the site or on the ground and then it can be hoisted to the proper position. The numbers of systems are available which are patented for the linear prestressing and with modifications to circular prestressing also.

Among the post-tesnionig system, Freyssinet stem is introduced firstly of all other systems. High tension steel wires of diameter varying from 5 mm to 8 mm about 12 numbers are properly arranged to form a group into a cable with a spiral spring inside. The spiral spring provides the means for appropriate clearance between the wires and therefore it provides the channel which is cement grouted afterward.  It is further used to assists to transfer the reaction into the concrete. This thing is properly enclosed in the thin metal steel.

The anchorage system consists of a cylinder of good quality concrete and is provided with some corrugations on outside parts. This has a central hole and is provided with heavy circumferential reinforcement. These cylinders are then kept in proper position and then the conical plugs are being pushed into the conical holes after cables are properly tightened. The central hole passing axially through the plug will permit cement grout injected in it. This is the way to put space between the wires which will be filled with cement grout. This arrangement will give an additional restraint against the problem of slipping of the tendons.

Advantages of the Freyssinet system:

Disadvantage of the Freyssinet  system: